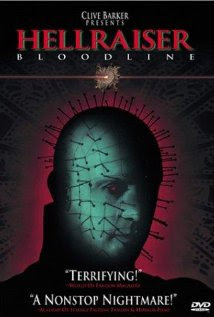 Wow, really? We're already going to space with this franchise? It's only the fourth movie. You don't go to space until way later when you are just shit out of ideas and don't even care about being good anymore (unless you're Jason X and you end up being totally awesome). Hellraiser: Bloodline actually just goes all over the fucking place in space and time, literally, and I don't really have much of a clue about what I just watched. 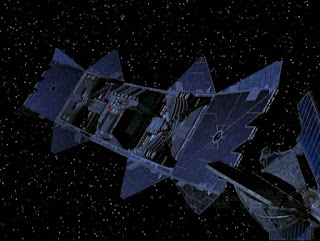 We start off in the year 2127 on a space station, where a guy named Merchant (that name should be recognizable) is manipulating a Terminator-looking robot into solving the puzzle box but some SWAT guys crash the party just as Pinhead shows up. The SWAT guys interrogate Merchant, and we get a whole history lesson on the family that built the first puzzle box and how they might hold the power to keep Pinhead out of our world.

Bloodline is interesting to say the least. I'm not calling it horrible just yet because of what may come in later films, but there is definitely something wrong about this entry and how it fits into the franchise. Somewhat jumping the shark so early and taking the story into the future is definitely not the choice I would have made, even if a good portion of the film actually takes place in different time periods. It's not a total train wreck, though, which is very surprising - especially considering the huge reservations I was having during the opening credits when the director was listed as "Alan Smithee." There were actually two directors for Bloodline, and they both were so disappointed with the movie that neither one of them wanted their name on it. Ouch. 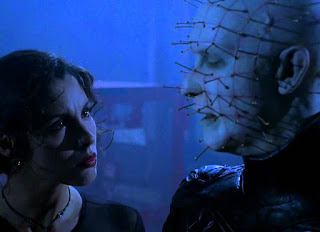 The main thing that I didn't like about the movie is that the main villain is not really Pinhead so much as this other chick named Angelique. And the even further problem with that is that we have no idea who Angelique is or what her background is. She appears during the portion of the film that takes place in 1796, when the box is first built by a toymaker named Phillipe LeMarchand. LeMarchand built it for a creepy, pancake makeup-wearing guy named de L'Isle who uses it to summon a demon through the body of this random chick his assistant, Jacques, killed and she becomes Angelique. But what kind of demon is she and where did she come from? Later on in time and in the movie there is a Cenobite version of her (I think), but was she a Cenobite to begin with? Is she from the same realm of Hell as Pinhead and that's how he knows her (because they act like frenemies for most of the movie)? When Pinhead finally does show up, it almost feels weird that he's there and that he doesn't fit in with the movie because he hasn't been the main villain so far. 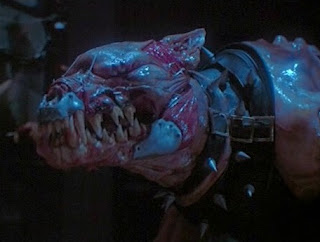 I do have to give Bloodline props for some cool things that it does. There isn't an abundance of great kills or anything (and one of them is basically a repeat of what they did in the previous movie) but what is there is pretty good. First of all, Pinhead's pet demon dog - we'll call him Fido - was both hilariously bad and hilariously awesome. Fido is the first BDSM dog I've ever seen who is not really that terrifying because all he can do is click his teeth really fast. How adorable. Fido doesn't get a crazy amount of screen time, though, so don't go into Bloodline expecting to see a lot of him. The repeated death is when the twin security guards become the Siamese twin Cenobite, and the effect looks just like when Spencer and Pinhead merged together in Hellraiser 3. The only real standout kill for me was in the portion in 1996 when Merchant is very cleverly decapitated with one of Pinhead's chains that has a nifty attachment on the end of it. This was also surprising because the audience was probably expecting him to survive. 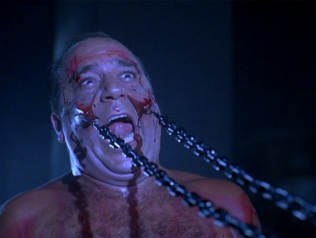 I'm not entirely sold on their explanation of what ends up defeating Pinhead. Light? Really? Just... light? Please tell me there was something more to this that I didn't care enough about to really pay attention, because I really hate to believe that Pinhead was dispatched with by LIGHT. And being blown up in space, sure, but mostly light. Kind of dumb, I'm sorry. Not sorry, though, to say that I kind of really liked the whole thing at the end where the space station turned into a giant puzzle box and explodes. It was a cool way to make the scope of the movie and the story that much bigger, and really, it was a fucking good idea.

I very much enjoyed the cast. Doug Bradley is of course back as Pinhead, but several other recognizable faces show up as well. Rimmer, one of the futuristic SWAT people on the space station is Mark Greene's wife from ER. Merchant's wife Bobbi is Kim Myers from Nightmare 2. Merchant's son Jack is child actor Courtland Mead. Jacques is a guy whom I randomly recognized as one of David's boyfriends from Six Feet Under. It's really a good cast all around and they each do a great job with their roles, never once either hamming it up or dumbing it down.

So what was my overall experience like with Hellraiser: Bloodline? I wasn't a big fan of the story, which was just way, way overreaching - going to space, jumping time periods, being really fucking confusing and not making any sense. I really can't give the movie any points for that. However, the execution is not too shabby when you really look at it. Like I said before, it's not a total train wreck, but it definitely could have been better.

Posted by Michele (TheGirlWhoLovesHorror) at 11:59 AM