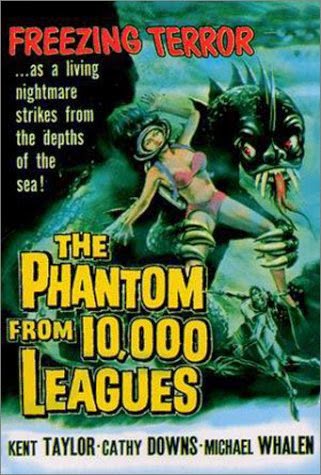 For something completely different, we have my next Project Terrible film, assigned to me by Mr. Maynard Morrissey. And it's a crappy science fiction movie from the 50s, which can sometimes be fun, but is not really at all in this case. Plus, I was having some computer and sleeping issues while trying to watch it and have now seen the first 20 minutes about five times now. They didn't really improve over time, in case you were wondering. 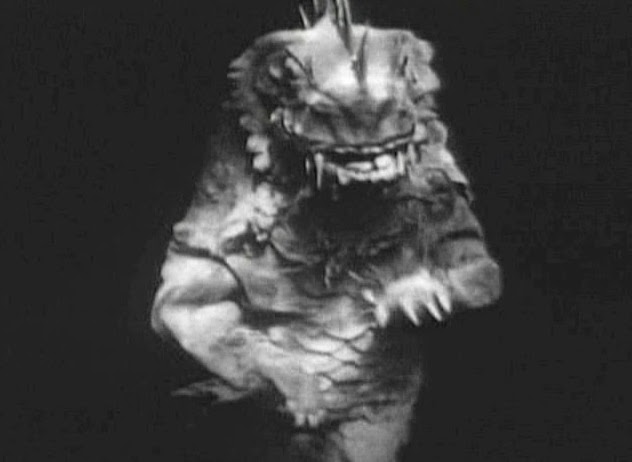 So this movie is about a mysterious "phantom" in the sea that is claiming the lives of some people that we don't care about. A government agent and an oceanographer both arrive on scene at the same time to find out what the monster is and who or what created him. And a local professor has been acting very secretive lately...

The first of many big mistakes of Phantom from 10,000 Leagues is that they show the audience the "phantom" literally within two minutes of the movie starting, when it kills a local fisherman. I know it's on the poster, but seriously. Do they have no sense of mystery at all?! You can pretty much turn off the movie after seeing that, because the monster is the most interesting part about it. He looks kind of like a Chinese Fu Dog - except for the hole right under his chin for the head of the actor in the suit. There's a lot of talk about the science about how the Fu Dog was created and such but it all sounds like blah, blah, blah to me. Something about a radioactive rock and nuclear light. Another problem is that there are a lot of characters to get straight. First Ted Baxter shows up and finds the dead fisherman at the beginning, then he meets up with the Department of Defense investigator Grant. Then this other guy named George Thomas shows up next, and he's the assistant to Professor King, who works at the local oceanographic college. But then Ted Baxter's real name is not Ted Baxter, it's Dr. Stevens, and he's another oceanographer who has done research on the effects of radiation on marine life. Then there's the Professor's daughter, the Professor's secretary, and this other blonde femme fatale who all play somewhat important parts. Ahhh! Stop bringing in new characters! Nobody is really the main character for most of the movie and it gets a bit hard to follow sometimes, especially if you're half-asleep like I was. Also, transitions between scenes and characters are not very good, and you never know who you are going to be following next. 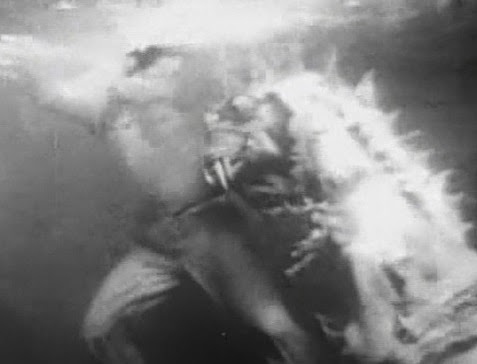 You're so busy trying to figure out what is going one with these people and who is lying to who and who is selling secrets to a foreign power, that you forget about the phantom for a while. He pops up again at about 45 minutes in, but only very briefly. With that huge headpiece on the costume, the poor stunt guy can't really do much anyway to make the monster look scary, except move his arms around a little bit. Definitely not as fluid as The Creature from the Black Lagoon. Wait! Did poor Ethel just get SPEARED on the beach? Hey, things are looking up! Well, not too much. The climax has some cool explosions, but still nothing all that exciting from the monster. Maybe the movie is trying to say that the humans who created him are worse the monster himself! How thought-provoking!

Like any good movie from this era, there has to be an unbelievable love story in it. I knew from the second that Stevens met King's daughter Lois that they were going to hook up. And surprise, surprise - they did! There's even a little meet-cute scene where arrives at the house to meet the Professor and Lois walks out of the bathroom after taking a shower, not knowing he's there. Oh, how awkward and full of sexual tension! They probably end up getting married after they watch Lois's father blow up in the ocean with the phantom - something that she surprisingly doesn't freak out about. Your father just got BLOWN UP. Shed a tear, at least.

I guess there's some nostalgic charm to The Phantom from 10,000 Leagues because of the monster and all the talk about radiation and death rays. It's definitely a product of its time and fits in nicely with other similar movies from the decade. But for me, it feels way longer than its 80-minute runtime because the movie is so slow and full of exposition. The action is minimal and lame, and the overall presentation of the movie is just plain boring. Nice pick, Maynard!

Posted by Michele (TheGirlWhoLovesHorror) at 3:26 PM