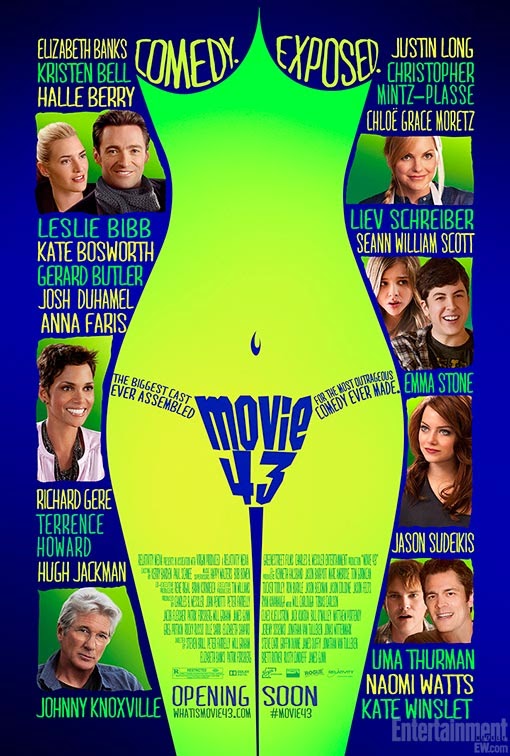 So what round of Project Terrible are we at here, guys? Are we in the 20s yet? Who cares, it's a good time, every time and I'm just happy to be back. The core four of us are participating this round - me, Alec, Maynard, and Bob - and as usual, there is a quite diverse group of films going on. My first movie, assigned to me by Alec, is one that people apparently really, really hated. Awesome. 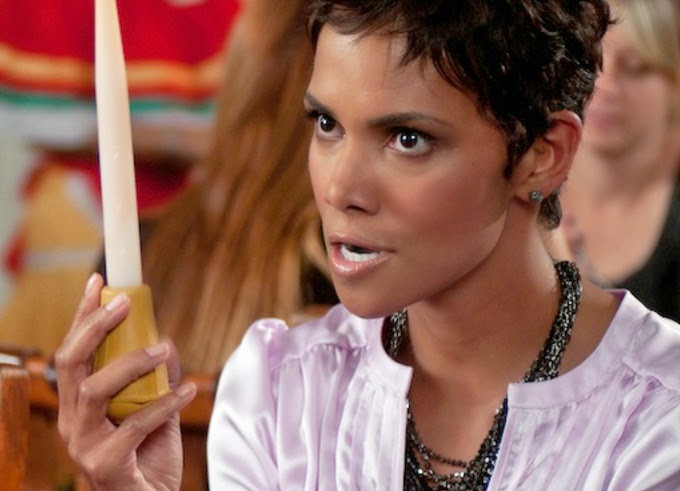 Movie 43 is this sketch-comedy anthology thing with a shit-load of big name stars in it. The wraparound story is Dennis Quaid as a screenwriter trying to pitch all his bad movie ideas to exec Greg Kinnear. All the shorts are then his ideas, get it? One or two, and sometimes five, Hollywood A-listers star in each sketch - most of them going completely against type from what they are known to usually play.

I really have no problem saying that I actually liked Movie 43 a lot. The great thing about an anthology, too, is that you don't really have to like the WHOLE movie, really. There were definitely some sketches here that weren't my taste, but I wasn't crazy offended by any of them and I didn't outright hate any of them. No, I lied. I hated the one with Anna Faris. But that was it! The rest of Movie 43 is just a bunch of oddball sketches where the material is kinda funny - but it's mostly only funny because of the actors involved. 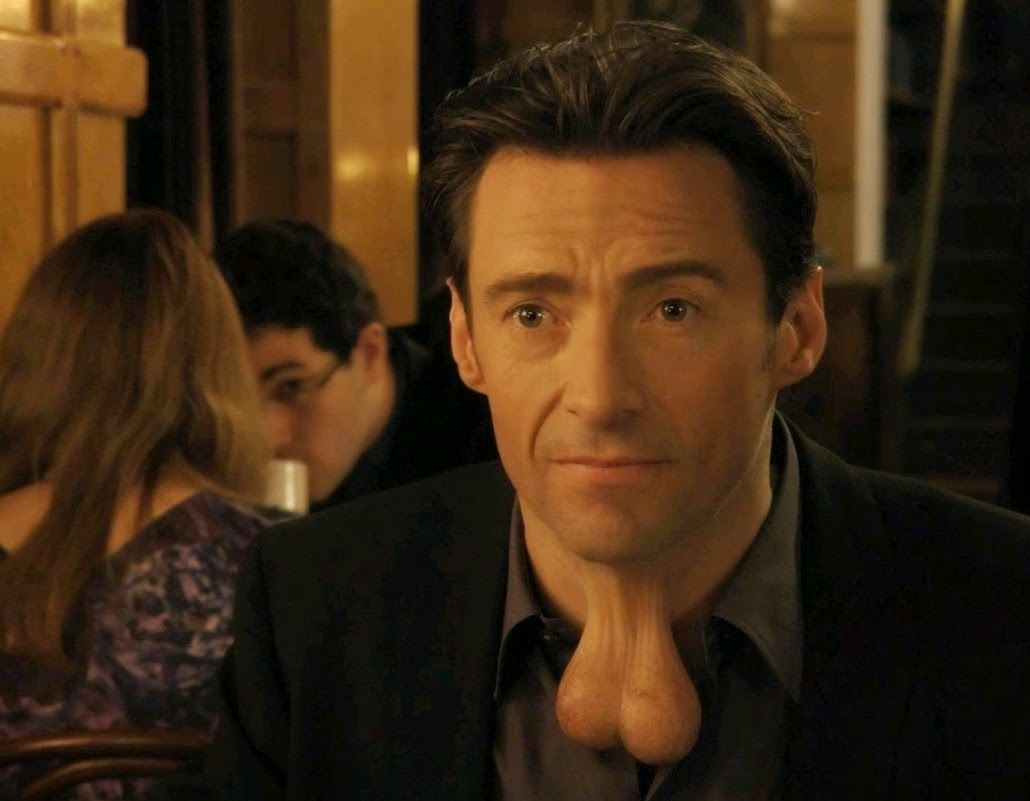 So what can you expect to see in Movie 43? Well, there's Kate Winslet on a blind date with Hugh Jackman, who has balls hanging from his neck. There's Chloe Moretz getting her first period at her boyfriend's house. There's Richard Gere peddling the iBabe - an iPod that looks like a life-size naked woman. There's Halle Berry playing Extreme Truth or Dare. And there's Elizabeth Banks getting peed on by a cartoon cat that is in love with his owner, Josh Duhamel. The overall idea is that this is a "gross-out" comedy which is probably my least favorite thing in the entire world. Strangely though, the gross-out stuff here didn't really go that overboard for my taste (except the Anna Faris one... really, really was not amused by that). There is way more juvenile crap out there than this, trust me.

The two best sketches of the bunch are "Homeschooled" with Naomi Watts and Live Shreiber, and "Superhero Speed-Dating" with Justin Long, Uma Thurman, Kristen Bell, Leslie Bibb, and some other people that I didn't know. Both of these were actually pretty clever with their comedy, like the parents who homeschool their kid - but still torture and belittle him so he'll get the "real" high school experience. Justin Long as Robin in "Superhero Speed-Dating" was adorable and I really liked the self-aware comedy of this segment, and the cheap look of the superhero costumes. 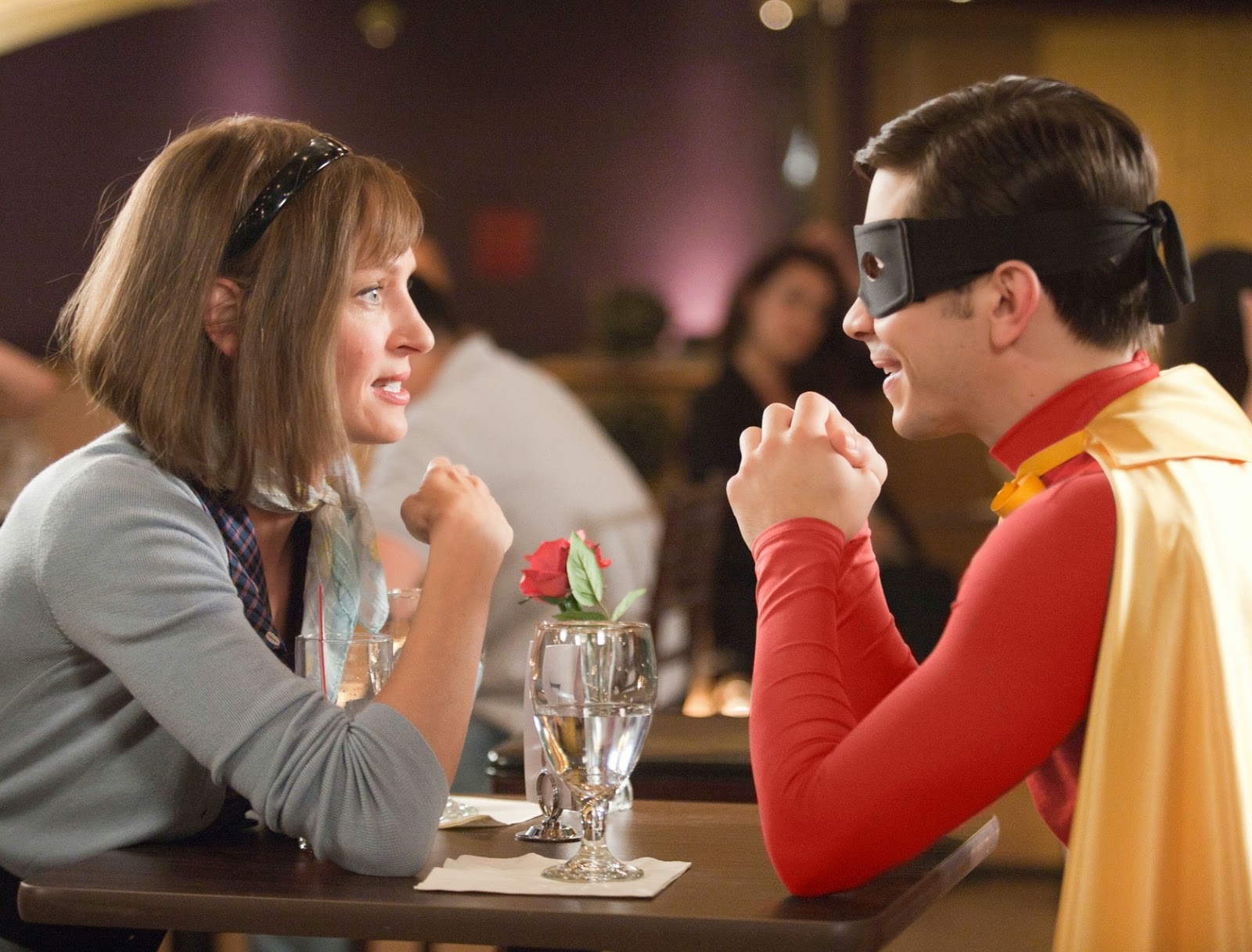 There were also a couple of funny fake commercials. "Machine Kids" was pretty awesome, and will maybe make you think twice about getting angry at that copy machine or ATM. Something that also got a big laught out of me was the Tampax commercial that shows a woman being hideously devoured by a shark in the ocean, followed by the tagline: "Tampax. Now leak-proof." And the whole period segment before the commercial should be amusing to a lot of woman because it makes fun of the way men freak the fuck out over girls' periods.

So who knows? Maybe it was the spring-like weather of the day that put me in a good mood and helped me enjoy Movie 43 more than I should have, or more than other people think I should have. It was genuinely funny at times, and even when it wasn't, it was just so off-the-wall ridiculous that you kinda just enjoy it for that. Usually this kind of thing would have been terrible to me, Alec, but alas, not this time!


Posted by Michele (TheGirlWhoLovesHorror) at 6:25 PM