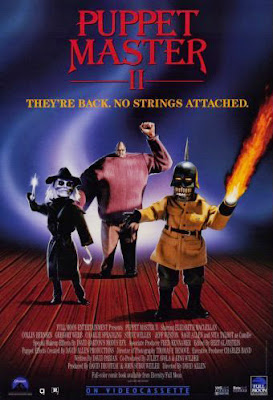 Sometimes known as having the subtitle "His Unholy Creations," Puppet Master II still doesn't exactly live up to what I thought the series had to offer, but it's starting to go in the right direction. Even though plot is once again a bit convoluted and confusing, and the main characters are dull as dishwater, the puppets get to shine a lot more - and that's really all we want to see anyway. 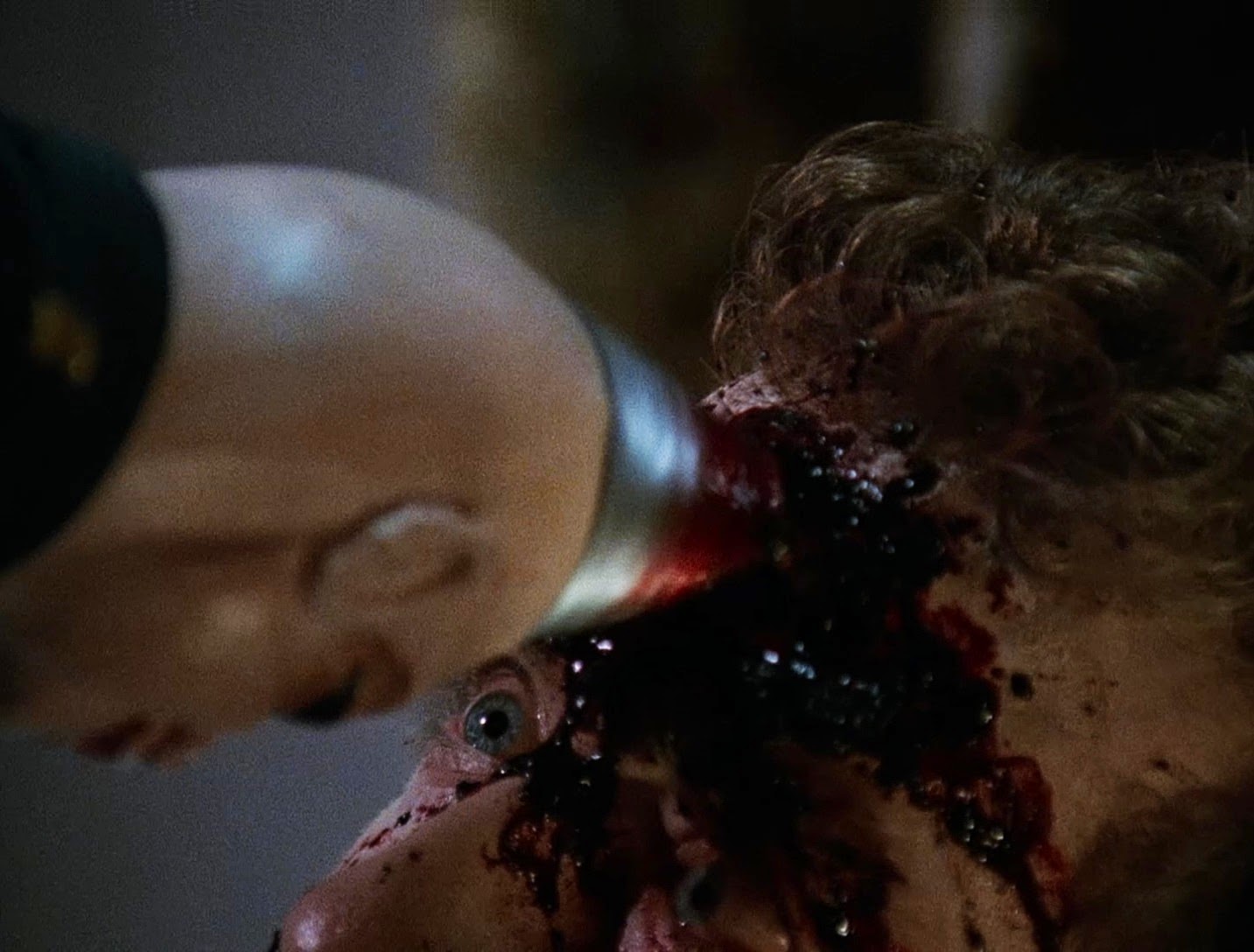 The sequel opens with Pinhead and the other puppets resurrecting Andre Toulon from the grave with a magic potion. It then jumps to our main plot and cast members, who are a group of paranormal investigators setting up shop in the Bodega Bay Inn. They are there to look into the accusations of psychic Alex from the first film and what happened there, along with the strange death of Megan Gallagher. At the same time that the investigators either start to go missing or get murdered, a strange man appears at the hotel, claiming that he owns the place.

It's really not the greatest plot they could have come up with, but it seems to come mostly from necessity - the need for uninteresting characters to be the victims of the puppets. One thing that they improved upon plot-wise was giving the audience a bit more of a peek into the magic that brought the puppets to life and also what brought Toulon back. The puppets don't just kill because their master told them to - Toulon needs different parts of fresh human flesh for his potion. That's gross, but I like it. There is also some excitement in the addition of Torch, a bulky Nazi-looking puppet with bullets for teeth and a flame-throwing arm. He gives Blade a run for his money in the badassery department. I was happy to see that the puppets got more animation this time around, with many more shots of them, full-bodied, running and jumping around. And the animation wasn't too shabby. 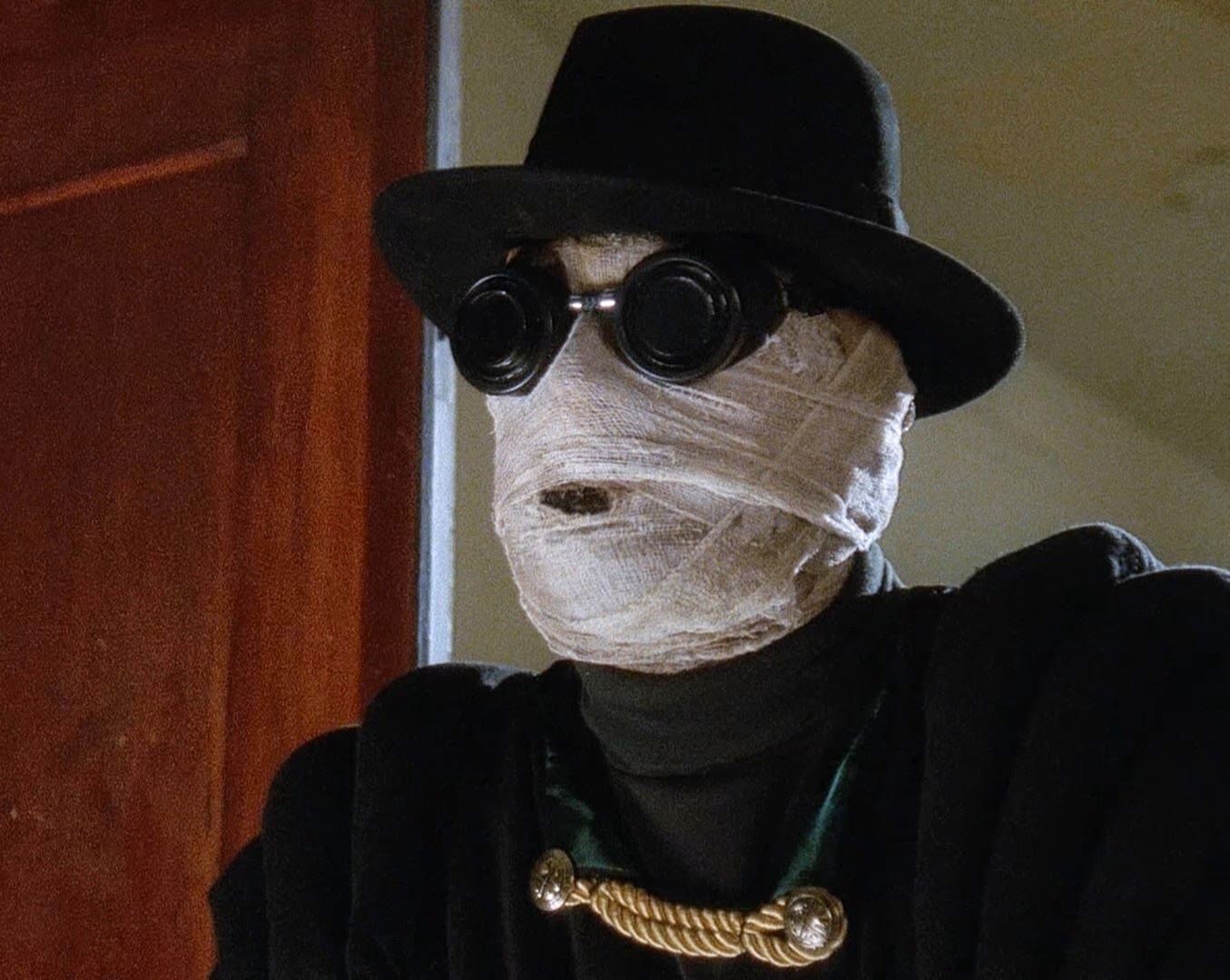 So there are some crazy random scenes in Puppet Master II. First, the leader of the paranormal dudes is Carolyn, and her brother Patrick unfortunately becomes the first (seen) victim of the puppets when Tunneler tunnels into his forehead. This becomes a strange situation because the police are never involved, and there's a confusing scene of the characters all gathered around his body in some cold room. Wait, what? Did they just put him in the hotel's walk-in or something? Later on, there is another crazy and really inappropriate and suggestive scene of a child playing outside with his GI Joe, or Ken doll, I could go either way here. Anywho, for some reason, a six-year-old has a whip and proceeds to use it on his shirtless doll, who is leaning against a tree. I'll just give you a minute to ponder that... When Torch shows up in the scene, it's implied that he kills the boy but I really hope that isn't true. 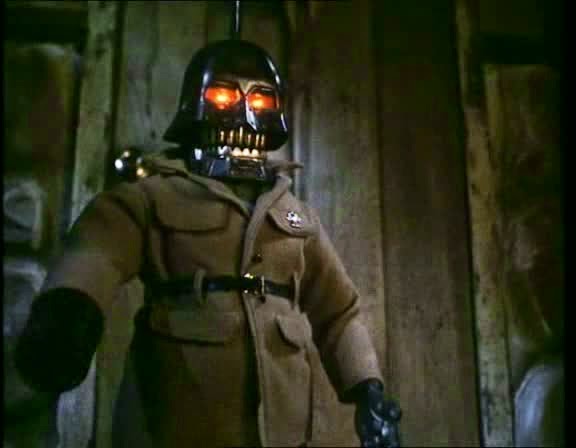 Toulon's role in this movie is also quite strange. The audience is given a little more of his backstory when they show him and his wife Elsa procuring some of that aforementioned magic potion from a guy in Cairo. When Toulon shows up in the present, he arrives looking not unlike Claude Rains's The Invisible Man and calling himself Erique Chanee, even though it's more than obvious who he really is. And instead of focusing on restoring the diminishing power in his puppets, Toulon goes on a weird side-mission where he becomes convinced that Carolyn is his dead wife and wants to use the potion to bring her back or something. This is apparently not a good idea because it angers the puppets and they end up killing their own master. I'm a bit confused as to how this is going to work out in later movies if Toulon comes back again or something, because he seems to have a very complicated relationship with his puppets. Up until now they have seemed mostly loyal to him, but since they are puppets, I'm thinking there's not much of a conscience going on.

The movie ends on an insanely creepy note that thoroughly disturbed me, and I was glad to see it all over. Puppet Master II definitely has its quirks and its low-budget appeal, plus the addition of a bomb-ass new puppet and some more backstory on Toulon make me think that maybe the series is headed in the right direction. Eight more movies to go. Let's find out!


Posted by Michele (TheGirlWhoLovesHorror) at 4:41 PM