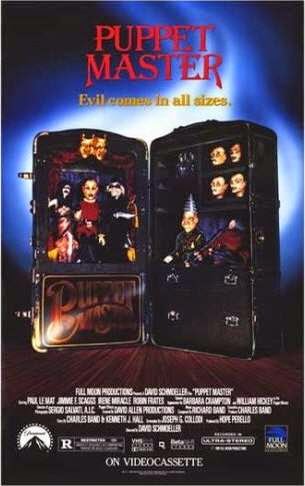 I have sometimes suffered greatly for this little blog. I put my faith in the Wishmaster series, only to be thoroughly crushed with each inept installment. I slogged through all of the Howling sequels - though that was sometimes fun. And now I will attempt to tackle another series that I am not quite familiar with: Puppet Master! I picked up a DVD pack with all the films (except the last one) for just 99 cents at my last convention, so hopefully the only thing I will be wasting is time if they end up sucking. 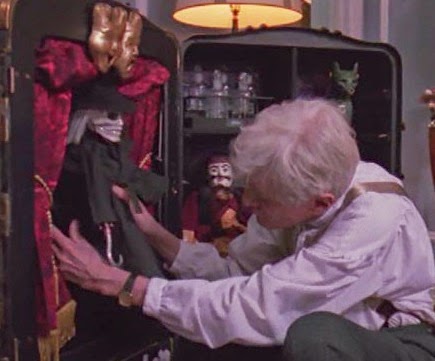 The first film opens with the Puppet Master himself, Andre Toulon hiding away his puppets in the wall of a hotel before two assassins can get to him. Why they are there to assassinate him is never really explained, but he ends up killing himself first anyway. I found out later that they were Nazis, which opens a whole other bag of questions that I hope gets explained later on... Anyway, in the present day, a group of psychics gather at the hotel and are one by one slaughtered by the puppets, who are controlled by a colleague of theirs who discovered Toulon's secret for eternal life.

I'm sure that I've seen at least one of the Puppet Master films... or perhaps it was the Demonic Toys crossover film... Either way, you're going to have bear with me as I go through these films, because I've not seen them before, and I've heard that the timeline of the series is all kinds of jumbled up. So far, my impression of this first film is not really that great. 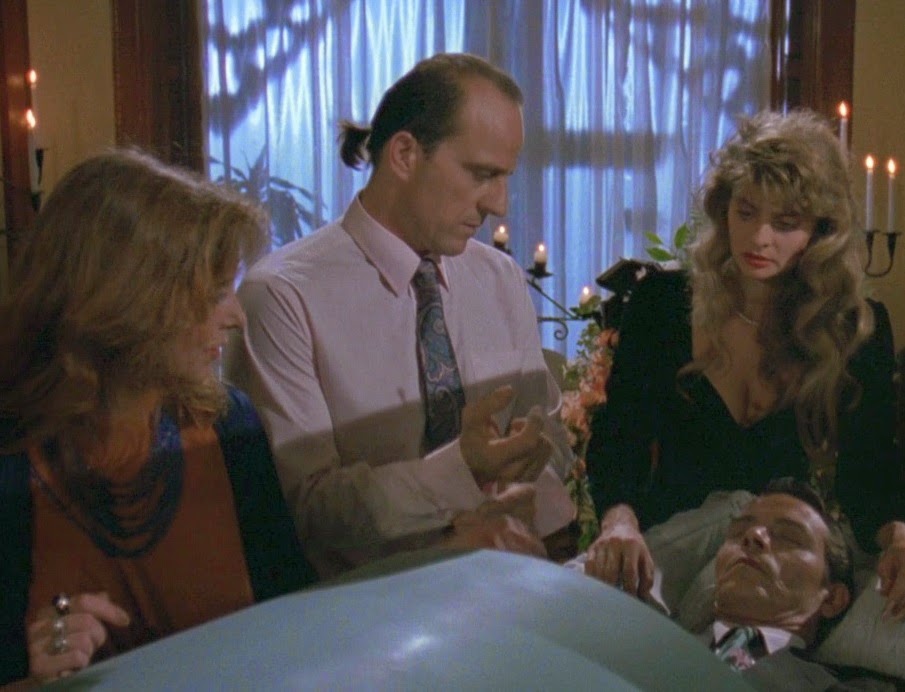 The main thing is that the movie is quite boring. I don't recall any of the Puppet Master films ever being described as overly gory or anything like that, but one would think that movies with puppets who are alive would be a bit more entertaining than this. It takes the movie almost a good thirty minutes to get to what is really the meat of the plot with all the psychics and stuff. I did actually like this part of the story - that all these people had similar, yet different, gifts that bonded them together. This is what makes them targets of their colleague, Neil Gallagher, so that he will be the only one who knows Toulon's secret magic. Apparently, he wants Toulon's puppets to kill them all because they will be able to read his mind - even though none of them have gotten any kind of inkling of his plan thus far. It's a shaky plot point at best, but let's just go with it because we have to. 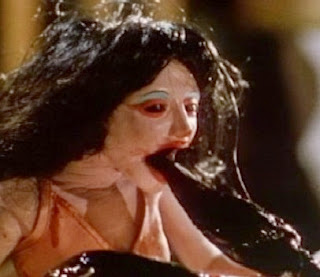 At the very least, Puppet Master can boast that it is the film that introduces some very interesting and deadly little toys to audiences. The leader of the pack is Blade, the white-faced, black trench coat wearing puppet with a hook for one hand and a knife for the other. Barbie's worst nightmare is Leech Woman, a sweet little female doll who is able to vomit up huge leeches out of her mouth. Jester is the puppet that Toulon is working on at the beginning of the film, although he apparently doesn't get his actual jester hat until later. Pinhead (not that one) is an interesting little dude with a tiny head and huge, human-sized hands, and Tunneler has a large cone-shaped drill coming out the top of his head. There are a couple others that are not featured as much, so maybe we'll get to see them in future installments. 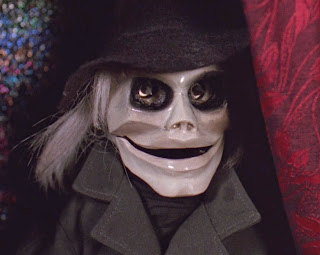 The film rightly has a dose of comedy in it, but it is careful about not going too far. There are a lot of exaggerated or comedic sound effects having to do with the puppets and the sounds they make. None of them actually talk, but they do make funny little grunting and squeaking noises - plus there was that part where the little "plop" sound effect was used when Pinhead's head was removed. The deaths that the puppets inflict are equally gross and funny, too, so that keeps up the comedic undertone. But that's sadly the only thing interesting about any of the death scenes, because they are pretty tame, and most of them are not even shown.

As for the human characters who are the victims of these boring deaths... well, they suck. They're all either really annoying or really uninteresting, and the acting isn't that much better either. And since no one would watch a Puppet Master movie for the riveting character drama anyway, we can just leave it at that.

It's not a particularly stellar start to the Puppet Master series, but I do still have hope that these pint-sized freaks will eventually bring me something truly entertaining in future installments. One down, nine to go... let's do this!

Posted by Michele (TheGirlWhoLovesHorror) at 7:38 AM