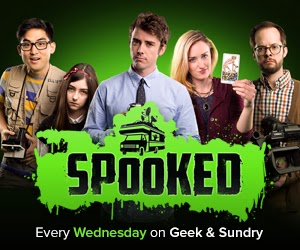 A few weeks ago, I was sent an email about this show called "Spooked." Produced by Geek and Sundry, a production company and commercial YouTube channel, the comedy show is in 20 minute episodes and follows the Paranormal Investigation Team (or "P.I.T.") as they travel to different locations when contacted to investigate cases dealing with the supernatural. I didn't want to write a review after only watching one episode, so I decided to wait. After watching the first three episodes in a row, I can officially give "Spooked" my approval! It's great! 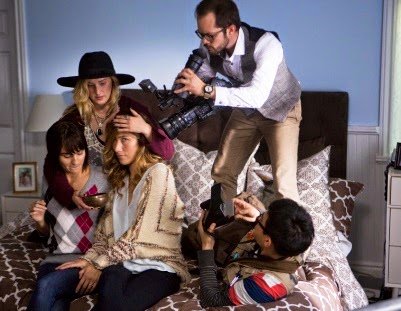 The team consists of the leader Connor; his clairvoyant little sister Piper; occult specialist Morgan; ghost hunter Elliot; and Lindsey, who provides the video equipment and bankrolled the operation. In the first episode, "Paranormal Professionals," you get the basic character introductions while the team takes on a very basic first case - a poltergeist. A lesbian couple, Donna and Carol Anne, believe that Carol Anne's father is haunting them because he didn't approve of their marriage. My favorite part of the episode is when Elliot says, "Carol Anne? Really?!", because that's obviously a reference to my favorite horror movie.

The show has a very self-referential sense of humor all around, constantly doing the cliché thing on purpose for comedy. Piper is the 11-year-old clairvoyant who doesn't talk, so of course she has to sit there looking all creepy with her long dark hair, sipping on her juice box. There's a séance scene, and basic poltergeist activity like banging walls and moving objects around - all stuff that you have seen before a million times over, but somehow they keep it fresh in "Spooked." 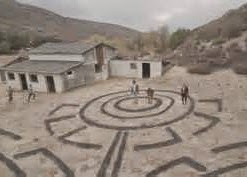 Much of the fun and success of "Spooked" comes from the amazing acting of all the talent involved. Everybody on this show is practically a comedic genius with perfect timing and delivery, and people acting just as much when they are background as when they actually have dialogue to say. Ashley Johnson as Morgan is the only actor that I recognize and she is fantastically funny and adorable. I can't really even say yet that I have a favorite character because they all have great moments throughout all the episodes. The one exception would be Piper, who is not really good comic relief but is an important member of the team. Maybe her age is what stops her from getting more screen time as opposed to the adults. 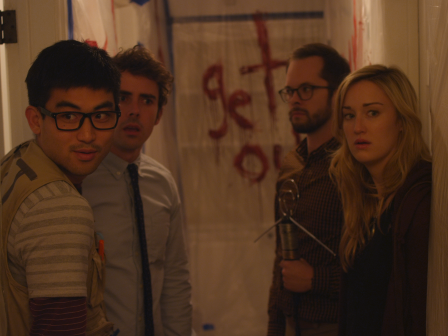 Episode two of "Spooked" is titled "Mixed Signals" and deals with aliens - not really my favorite thing, but they make it work for them with what little they have. The paranormal plot takes a backseat in this episode to the growing relationships of the main characters, and things definitely get a bit more interesting here. A love triangle develops among Connor, Morgan, and Elliot. The show still treats this situation as mostly comedy, and never really gets all that serious. If the show goes any further, I hope they can find the balance between keeping the show's comedic tone along with adding a bit more seriousness and maybe some drama here and there. It's possible, I'm sure they could do it. 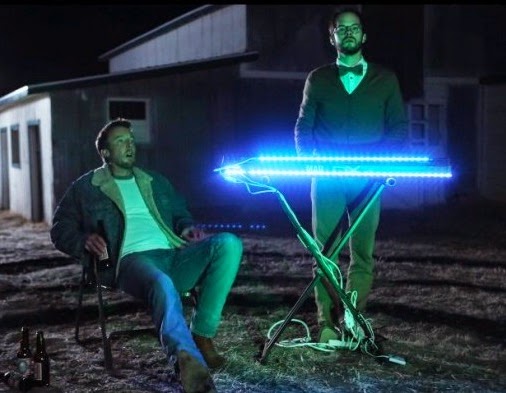 The best episode is by far episode three, "Brotherly Departed." Not only does it guest star one of my favorite people, Tom Lenk, but it is also the best written episode so far. Matt (Lenk) calls P.I.T. because his brother Andrew's ghost is haunting their apartment after drowning in the pool. The twist comes when Matt reveals that Andrew didn't actually die and is not just pretending to be a ghost. So then there is another, much better, séance scene where Andrew comes "Whoooooooo"ing in wearing a white sheet while the team has to pretend like he's not there. Funny stuff. The ending (which they hint at way too much so it's hard not to guess what happens) is close to being the line between funny and serious and I loved it.

Geek and Sundry is produced by actress Felicia Day and I certainly like what she has created so far and the people that she has gotten to be involved with it. "Spooked" is a wonderful show with plenty of room to grow and plenty more paranormal experiences to explore so hopefully we see a lot more of this in the future.

Posted by Michele (TheGirlWhoLovesHorror) at 6:14 PM