If there is one thing that I love about these giallo films, it is that they have fucking great titles. My favorite giallo so far also happens to have my favorite title - Your Vice is a Locked Room and Only I Have the Key. I don't even know what that means, but it's awesome. Today I'm dishing out a double dose of giallo and awesome titling with Twitch of the Death Nerve and Four Flies on Grey Velvet, both from 1971. 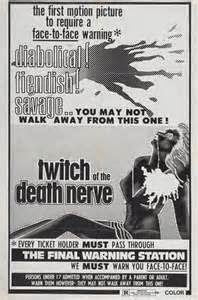 Twitch of the Death Nerve (1971)
Netflix had this movie listed under the title A Bay of Blood, and I would have watched it a helluva lot sooner if I had known that this was really Twitch of the Death Nerve, a movie that I've been wanting to see for a long time. It has as big a reputation as it does a list of other alternate titles, and it is by far the most confusing giallo I've watched so far. The plot is not really explained fully until the movie is almost over, so much of what you are left with is some random people in some place getting killed by somebody. Not that there's really anything wrong with that by definition, I just had a hard time following it. Twitch of the Death Nerve has a high body count (like, almost everybody in the movie dies) with some very fun and cool kills in various ways and with various implements - hanging, spear through the body, hooked machete to the face, beheading, etc. I liked how four of the victims were just some random couples who chose the wrong day to break into the wrong house for a little party, while the rest were actually a part of the plot. Nice way to up the carnage. I was stoked to recognize the actor playing Albert - he's Luigi Pistilli from my beloved Your Vice is a Locked Room. He actually plays a semi-good guy in this movie, despite most of his actions, so he proves himself readily able to play both good and evil. The ending to the film is so crazy and out there that it is just awesome, and after all the other craziness that Twitch of the Death Nerve has put you through before that, you're more than willing to just go with it. I mean, what is with that strangely sexy shot of Brunhilda with her legs crossed like that as she lays on the ground dying? And the squid on the dead man's body? That messed up plot where everybody is killing everybody else? The whole thing is cray-cray, I tell you, CRAY-CRAY. I personally don't think it's one of the better giallos out there (I have some other favorites in mind) but Twitch of the Death Nerve is hella fun and for fans, it is definitely a must see! 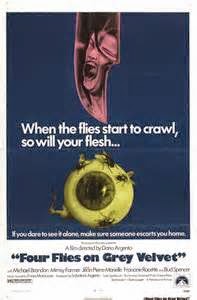 Four Flies on Grey Velvet (1971)
Probably my second favorite title ever right here. Four Flies on Grey Velvet is another fantastic output from the master, Dario Argento. One reason I liked the movie is because I could actually follow the plot and characters, unlike some other previously mentioned films. The movie follows musician Roberto as he accidentally kills the man he believes is stalking him... but his torment doesn't end there. Someone saw him commit the crime and is slowly trying to drive him crazy as the people around him start to die. Argento's camerawork is another reason to appreciate Four Flies, as he lets us know right from the beginning of the movie that we are going to see something from the eyes of a master. The opening credits have some very cool shots (love the one from the inside of the guitar), and throughout the film there are many other stand-out sequences - the shot of the guy in the creepy mask in the balcony; the camera following the phone line from the booth where the housekeeper is talking to the killer all the way to the killer's phone; great shot of the killer twisting a wire around a victim's neck; and a one very trippy shot of a victim's upside down head hitting every step as she falls down a staircase. None of this is to mention the equally trippy finale of the longest slow motion car chase ever put on camera, and the reveal of what the title is referring to. The only disappointment I really have about the film, or the plot really, is the somewhat lame explanation of the killer for his or her actions. But I guess you don't really need that much of a motive if you're just plain crazy. This movie also has some of the more interesting characters I've run across in giallo - mostly the gay private eye, Arrosio, and Roberto's friend Godfrey. Four Flies on Grey Velvet is just an all around awesome film - so much greatness to be found here, from the acting to the camerawork and editing. It's a new favorite of mine, for sure.

Posted by Michele (TheGirlWhoLovesHorror) at 5:03 PM