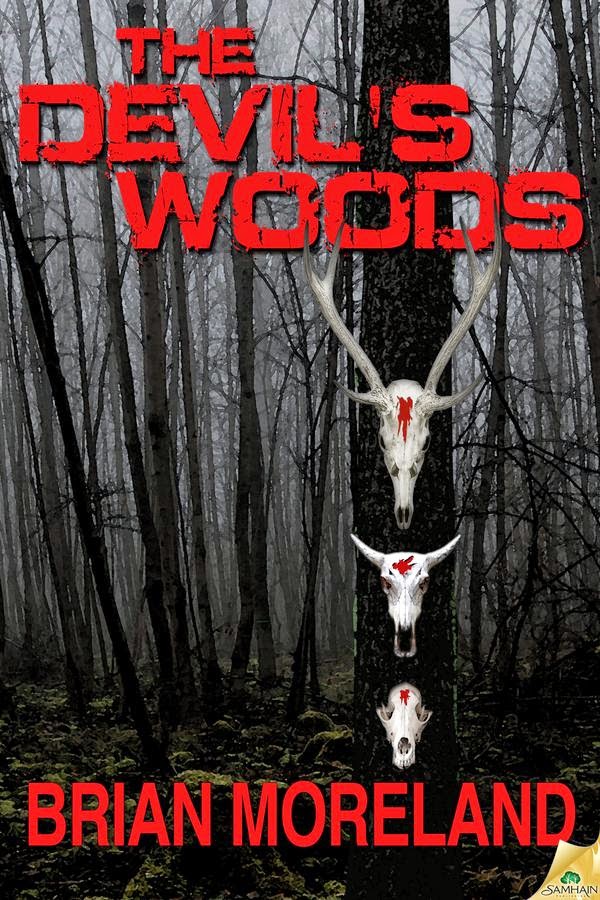 So as I mentioned a few weeks ago in my write-up of Texas Frightmare Weekend, one of the cool things to happen at that event was that I finally got to meet author Brian Moreland, a new favorite author of mine for whom I have read and reviewed several books. At Frightmare, he was kind enough to give me a copy of one of his latest books, The Devil's Woods.

Kyle Elkheart is a horror author haunted by a painful past. He sees an opportunity to reconnect with his spiritual self when he and his brother and sister return to the Cree reservation they grew up on when their father goes missing after taking a crew on an archaeological expedition. They dangerously ventured into what locals call The Devil's Woods, a forest long-thought haunted. As Kyle and his siblings search for the elder Elkheart, they will learn that the legends of the giant, black creatures that inhabit the woods are true, and that their childhood home holds a dark and evil secret.

The Devil's Woods is another story from this talented author that floored me with its creativity and depth. Moreland has proven to never be scared to go completely out there with his novels and create stories that go far beyond the standard horror fare, and The Devil's Woods is no exception. Always approaching such fantastical and supernatural stories with maturity and respect, he certainly has found his niche in the horror genre and one that he is getting better and better at with every new book. 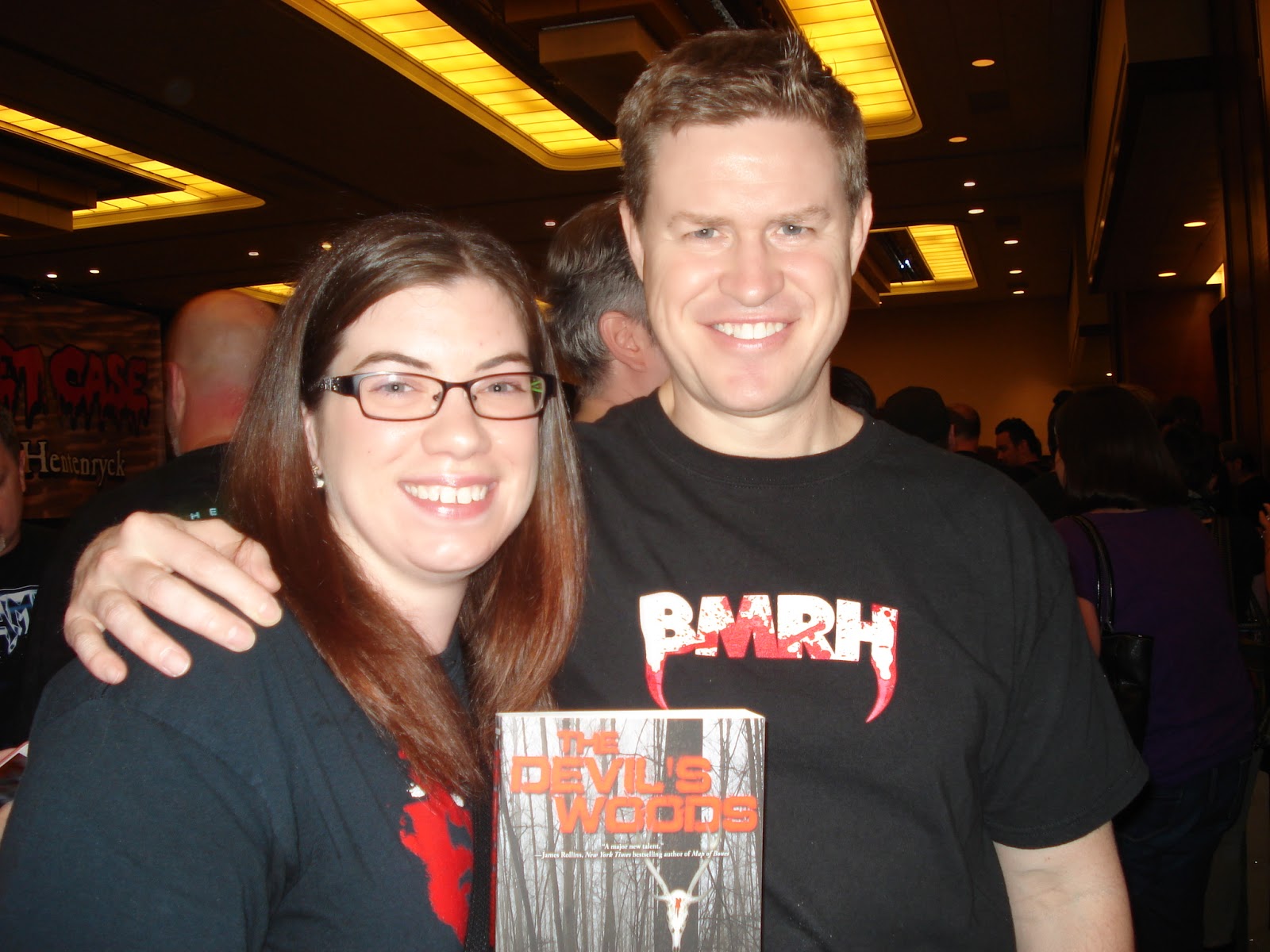 Most impressive about The Devil's Woods for me as the reader were the wonderful characters Moreland created. I was very happy to be reading a book where I actually liked all - okay, most - of the characters, and that they were given real and relatable personality traits. The only one of the main characters that kind of sucks is Eric, but he's obviously written so that he's supposed to be unlikable, so that's okay. Eric is a womanizer with not much of conscience, and he has trouble seeing the good things that are right in front of him, like his girlfriend Jessica. A beautiful Aussie with an effortlessness about her personality and style, it's easy to see why two men end up fighting over her. Kyle and Eric's sister Shawna is a rebellious, tattooed druggie but essentially with a good head on her shoulders. Likewise, her boyfriend Zach also proves himself to be a better man on the inside than he presents himself on the outside. 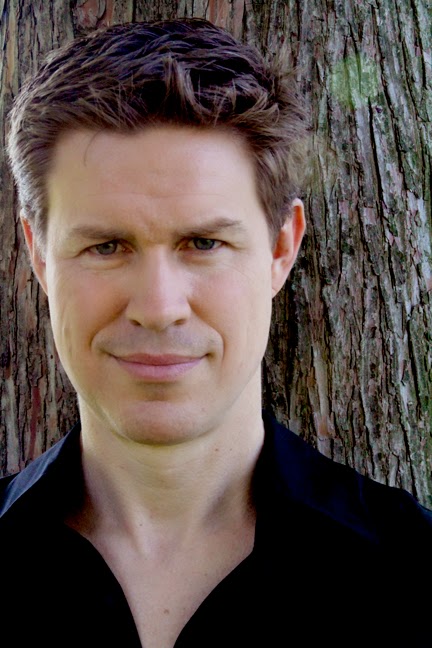 I always hate how in books or movies, the creators always try to force two characters into a relationship way too soon and way too easily. Moreland gradually grows the characters of Kyle and Jessica (initially Kyle's brother's girlfriend) together, and doesn't base their attraction solely on the physical. Their relationship evolves in a natural way that is a turning point for Kyle's character, so that by the end when he is risking his life for Jessica, you have no problem believing it at all.

And because all these characters were so likable, the brutality with which they are faced is that much harder to take for the reader. Indeed, Moreland really gets down and dirty this time around, with some sickeningly descriptive instances of creatures attacking and killing people in very gruesome ways, and also some very gritty mentions of rape by both creatures and humans. A lot of perverts in this book. Was this really written by that same nice guy that I hung out with at Frightmare? But this is what I love about horror, and the people who create it, so I was with Moreland all the way on this one, with everything that he did. Each new twist of the plot brought out something surprising and unexpected from characters that we thought we knew, and from a plot we thought we knew. The end reveal of what is happening in the woods and the town is just as shocking and unreal as such reveals in Moreland's previous books, and I loved it.

And it won't take you long to get to the jaw-dropping conclusion, because The Devil's Woods is another lightning fast page-turner from this talented and inventive writer. I've sung his praises before and will continue to do so as long as he keeps entertaining the hell out of me with his stories. Get a copy of The Devil's Woods (or any of his previous books) and discover Brian Moreland today! 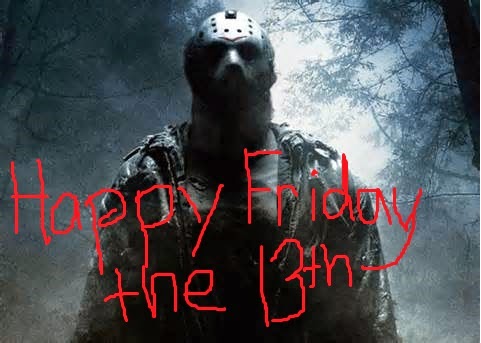 Posted by Michele (TheGirlWhoLovesHorror) at 5:08 PM