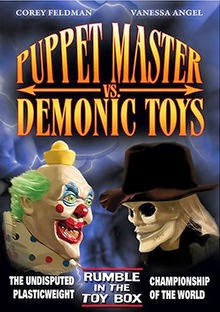 Well, of course I couldn't leave out this little gem from my journey through the Puppet Master series. I didn't include it in the regular series because as Charles Band himself said, it is not an official part of the Puppet Master canon. But thank goodness it still even exists, because it is one wonderfully, terribly, horribly bad awesome movie. 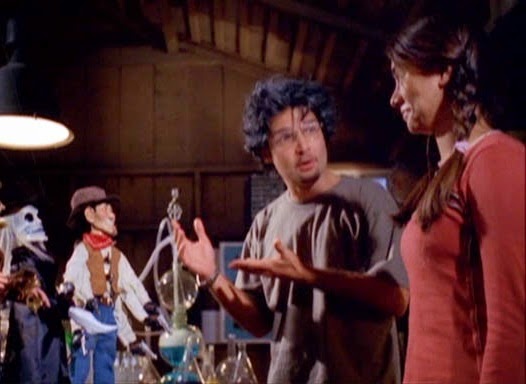 The head of evil toy company Sharpe Industries, Erica Sharpe, has plans to unleash millions of killer toys on Christmas morning, with the help of the demon Bael and the Demonic Toys. Meanwhile, the last two members of the Toulon family, Robert and his daughter Alexandra, resurrect their puppet guardians just in time to fight Miss Sharpe and save themselves and millions of innocent lives.

I simply cannot praise this movie enough. I mean, Puppet Master vs. Demonic Toys simply has everything you could want from a cheesy, cheap movie about dolls that come to life. Hilariously bad dialogue. Hilariously over-the-top acting. Hilariously bad animation and sound effects. Stupid, way-too-informative title cards. This entry doesn't necessarily fit the tone of the other Puppet Master films (though a few of them came dangerously close) but it is still a welcome addition simply because of how much fun it is. The film moves at a fast pace while still managing to cover all its bases story-wise, and the comedy keeps you wanting more with each new bizarre development. 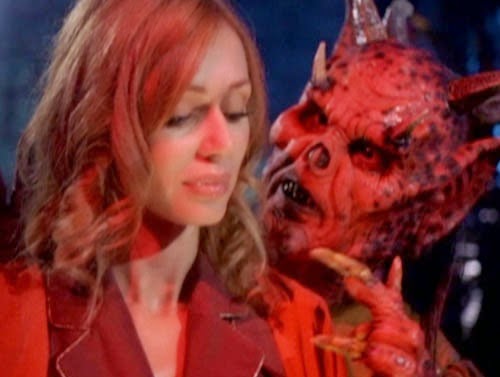 Sidenote: You know what one of my favorite things about these cheap movies is? Ill-fitting and very, very fake-looking police uniforms. For some reason, it always makes me laugh when I see some poor actor who has to wear one of those because it just looks so ridiculous. Sergeant Russell, I feel for you.

Now, I'm sure everyone loves Corey Feldman's performance the best out of those in this movie, but he is more than equally matched in hilarity by Vanessa Angel, who plays Erica Sharpe. She plays a typical HBIC with a touch of a spoiled teenager very well, and delivers every stupid line she has to say with amazing talent. Plus, she wears that one odd red dress like a BOSS. But yes, Corey Feldman rocks the house. Not only does he play a man whose daughter is about the same age that he is, but he also completely brings down the dignity of the name Toulon with one hysterical, totally committed performance. He's having fun with it, so therefore, the audience is too and that's all you can really ask for in a movie like this. Feldman also gets the absolute best line in the movie: "Baby Oopsy kicked my butt!" 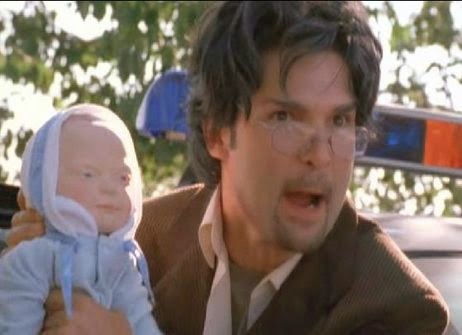 Speaking of which, there's a lot of interesting stuff with the dolls here. On the Puppet Master side, we have what seems to be the core four: Blade, Jester, Pinhead, and Six Shooter. I hate to keep harping on how the look of the dolls seems off from movie to movie, but is so much worse here. Poor Blade! Why did he have to have such long hair? And there's just something weird about the faces on Six Shooter and Jester. Actually, they all look pretty shitty, let's just say it. Anywho, our favorite puppets just as likable as ever here, and they are even rewarded for being so awesome by getting some nifty upgrades from Robert, like laser guns and super-strong titano-arms. This is all made even more amazing during the final fight sequence with the Demonic Toys. My man Jester finally gets a useful weapon when his right hand is replaced by a shiny new mace. You go, cutie. 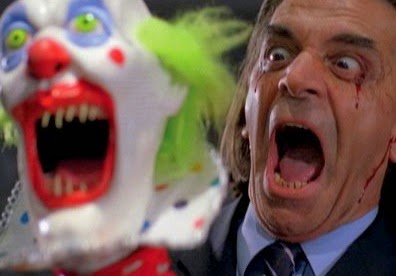 On the evil toy side, we have Baby Oopsy Daisy, Jack Attack, and Grizzly Teddy, who were just as entertaining as I remember them from when I saw the first Demonic Toys movie many years ago (I know, I need to catch up). Being the only talking toy of the bunch, Baby Oopsy Daisy does his part to stay rude and crude and keep the fun alive while Jack Attack and Grizzly Teddy are just really scary. Was Baby always able to do that little fart-and-fly move that he does in this movie? 'Cause that's stupid. But I still love it. Jack Attack seems to have the best skill of them all, though, as he makes a guy's eyeballs pop out of his head in the climax scene. Nice!

I could really talk about how awesome each individual scene is in Puppet Master vs. Demonic Toys, but that would obviously take too long. If you've already seen the movie, you know what I'm talking about. And if you haven't seen it, you really need to do that right now.

Okay, so NOW the Puppet Master series has been completed! Any more suggestions for what franchise I should tackle next? Hellraiser, Subspecies, Pumpkinhead? What say you?

Posted by Michele (TheGirlWhoLovesHorror) at 2:56 PM