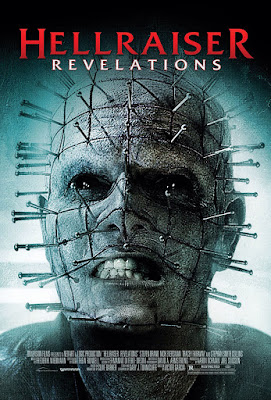 Hey, I did it! I made it through the Hellraiser franchise, and for the most part, it was pretty awesome. There were definitely some surprises along the way in this journey and I found some cool movies. This final installment, Hellraiser: Revelations, was most certainly NOT one of them. Damn, what a sad and sucky way to end the series. Except for the remake, which is probably coming. 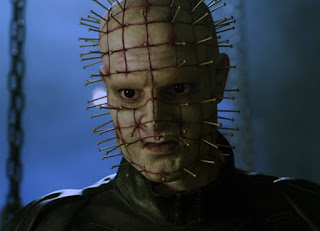 Steven and Nico are two douchebag teenagers who run away from their perfect white picket fence lives to go be assholes in Tijuana. Their families don't know what happened to them until Steven shows up again one night at his parents' house while Nico's parents are visiting. Some dumb stuff happens and the new Pinhead sucks. That's all the description you need.

I know I said I was going to try to be a lot more positive about things from now on... but Hellraiser: Revelations is making that so hard. Actually, I can give the film a little bit of props for one thing. Some elements of the plot do resemble that of the first film - Nico is sought after by the Cenobites, he comes back by way of blood, there's some murders, and there's some skin-stealing. The movie is intercut between scenes of what happened to the boys in the Mexico and the present day situation with the parents and Steven's sister, so it does make for a nice revelation at the end. However, everything else about the presentation of this movie is pretty abysmal. 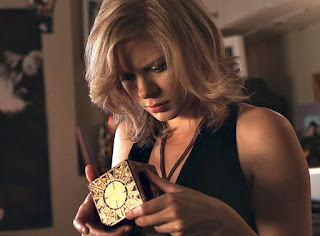 The script is just not good. I was getting annoyed just in the first couple of minutes when the boys - filming their little endeavor to Mexico with a camcorder like all douchebags seem to do - mention bow-legged hookers and knob-gobbling in their conversation. Great. The inaction by the parents, four adults who are just completely powerless without a phone or a car, also becomes a problem later on. There's the weird sexual tension that the sister Emma brings (especially a VERY awkward kissing scene), there's the guy who stands there like a moron while his friend is being attacked, there's the same guy who survives way too long after being shot in the gut, there's the way that the only thing the women know how to do is scream... Gah, this poor movie doesn't have a chance in hell of anybody taking it seriously or liking it. 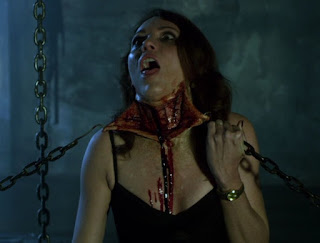 The thing that I was the most worried about before starting Revelations was the fact that Doug Bradley chose not come back, and from the pictures I saw, the new Pinhead just looked wrong. Really, that was the least of mine and this movie's problems, but it still didn't help things in the least. The new Pinhead, played by Stephan Smith Collins, really threw me off simply because of his look. He has a way different face and body shape than Bradley, making him look more like a linebacker or something. He does do a good job at matching his voice and cadence of speech, I'll give the actor that. But the lines he is given to perform often sound so completely overdone and pretentious that he becomes, again, annoying rather than menacing.

Hellraiser: Revelations is a blessedly short hour and ten minutes long. They pack a lot of shit into that tiny runtime, but that's all it ever ends up being. With such a quick script and turnaround time for the movie being released, they obviously didn't put the effort in that this series deserved. Shame.

See you later, Hellraiser! Time to tackle another franchise!
Posted by Michele (TheGirlWhoLovesHorror) at 4:40 PM