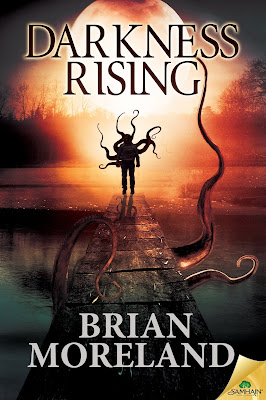 To any horror fan out there who says that there are no more original stories to be told: I know of a couple horror authors that will make you eat those words and choke on them. One of them is the incredibly original and unique Brian Moreland. I've now had the pleasure of reading several works by this great author and he is truly one of the best kept secrets in the horror world because of the amazingly original stories he comes up with and the unexpected surprises that appear in each one.

His latest novella is "Darkness Rising," and it was released by Samhain Publishing on September 1st (you can get the Kindle e-book version HERE). It is the story of Marty Weaver, a tortured and troubled soul who found a way to deal with his abusive and tragic past through the power of poetry, and through the friendship he develops with a girl that he falls in love with, Jennifer. But when Marty is visiting the lake that has great significance in his life, he runs afoul of three killers whose actions set in motion a series of events that bring back the horrible events from his childhood and set Marty on a path of revenge.

What I've said before and will now say again about Brian Moreland is that he has an incredible talent for creating some of the most imaginative and inventive stories I've ever read. All of his books and short stories start off in a similar fashion as other horror tales, but by the end, he has taken the idea to a whole other level that you didn't think was possible. With Darkness Rising, he takes the complex concepts of ghosts, trapped souls, and Purgatory and puts it into a context that is very meaningful for the characters he has created. Without giving too much of the story away, Marty is brought back to life through the power of his words and the energy he has given to an entity or demon in the lake. This force latches onto that deep, dark area in Marty's mind that is filled with rage, and it causes him to do terrible things. But the side of Marty that is still healing is there as well, and there is a wonderful power struggle that goes on over the course of the story where he feels justified in his revenge on some people, but still has moral quandaries over it. 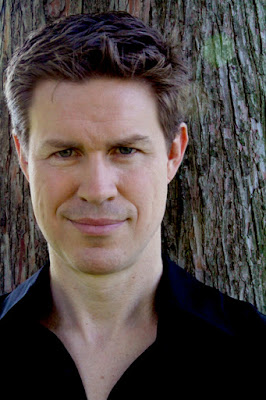 The relationship between Marty and Jennifer is one that is believable and based on a nice understanding and truth between the two of them. They don't spend a whole lot of time together in the story, and most of their relationship is viewed by the reader through Marty's eyes. We still get it, but it would have been more meaningful to have a more poignant scene between these two characters to make it really hit home. Some other characters in Moreland's story are the trio of masked killers - Tara, Zane, and Seth - who you are first led to believe are just sadistic psychos who like killing, but later learn that they are involved in something much more sick and twisted. Interestingly enough, the leader of them is the girl, Tara, and I loved this shift in the typical gender roles you see in horror. Girls have sick minds, too, that's for sure. The sideplot involving these three characters is no doubt disturbing and messed up, but it was interesting too, and I liked that they were given more a little bit more characterization beyond just being psychopaths. It definitely doesn't make you like them any more, because you definitely shouldn't, but it was a great touch to add to the story.

Another thing Moreland is very good at is keeping horror fans like me happy with the inventive sequences of gore and violence that he comes up with. If you don't think you can cringe and be just as affected by stuff you read in books as much as what you see in movies, give Darkness Rising a read. There is some great stuff involving razor blades that really got to me, as well as a horrific and descriptive scene where a character is dragged to his death behind a car that makes your stomach turn just to picture it. There is far more blood and gore packed into this story than I can talk about here, so I'll just have to leave you to experience it on your own.

Darkness Rising is another wonderful output from the very talented Brian Moreland. He continues to come up with stories with amazing fantastical elements that still have meaning and truth for the characters experiencing them. He is one of the most unique voices in the genre today and you should all get your hands on a copy of one of his books today!

Check out Brian Moreland at Samhain Publishing here, and check out some of my other reviews of this author's awesome work right here on this blog.

Posted by Michele (TheGirlWhoLovesHorror) at 6:01 PM