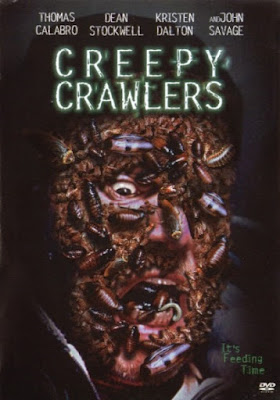 What a seriously surprisingly fun movie! I picked up Creepy Crawlers (aka They Nest), a TV movie from 2000, at my convention over two years ago because it was cheap and looked cool. But t's just been sitting on my shelf ever since then. I finally decided to pop it in tonight, and wish I had done so much sooner! I didn't know anything about the movie before, so I was, again, surprised to see in the opening credits that the movie was directed by Ellory Elkayem, whom you should all know and love from Eight Legged Freaks. 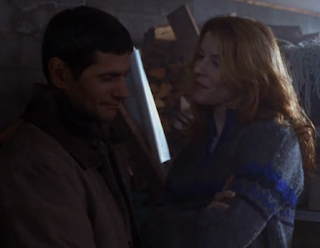 After having some problems at work because of his alcoholism caused by a divorce, Dr. Ben Cahill takes a forced vacation at his second home on a small island in Maine. He's not welcomed by some of the locals, especially when a few of them wind up mysteriously dead. It turns out that a massive hoard of rare cockroaches have taken over the island, made all the more deadly by the way they nest inside their hosts.

Creepy Crawlers is most definitely Elkayem's warm-up or practice film to do before Eight Legged Freaks was released two years later. The quirky, fun-spirited tone of Eight Legged Freaks is completely present in Creepy Crawlers, and it is heightened mostly by the acting and music. The situation still feels real and dangerous, and there are some really great gross-out and hilariously shocking moments here. The story moves fast, although it does go a little too fast at the end, when the climax comes too quickly and is not quite as satisfying as it should have been. 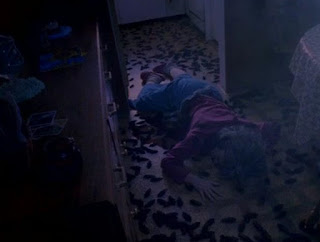 Thomas Calabro (of Melrose Place fame) as Cahill is more goofy than sincere in his role, but it works perfectly in the movie, especially when he's up against the resident, "all-outsiders-suck," islanders. Instead of acting all somber and depressed like you'd think a divorcee would, Cahill is actually refreshingly okay with his situation and just seems to be trying to make the best of it. He's quite charming and likable, as is Nell, the requisite unencumbered hot island girl with whom Cahill could have a chance. They don't push the issue too hard, though, which I really liked.

As a sidestory to the cockroach problem, there is also something going on with one particular man on the island, Jack Wald, who is angry with Cahill for buying his family home that was taken by the bank. He in turn has some friends that are behind him, and cause some extra shenanigans with Cahill, the sheriff, and Nell when they obviously have more pressing matters at hand. Instead of feeling out-of-place, though, this actually does add some extra conflict to the plot which otherwise might have been too easy to get out of - just get off the island. 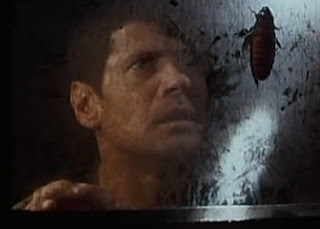 The effects are pretty great! Like I said before, there are some good gross-out moments, like the cockroaches in the chicken, when Cahill gets a roach on his fork while having dinner with Nell. Of course there are some computer-animated roaches in there, but it's to be expected and it looks fine, especially when they have to have a whole hoard of them in the barn sequence or when they are crawling all over people. Possibly the most surprising moment comes when the roaches attack Sheriff Hobbs, in a pure "The fuck?!" scene. The effects of the roaches as they burrow inside people are okay, but I would have really like to see a scene where they full-on burst out of the host, like we assume we do based on all the dead animals bodies lying around, but maybe that would have been too much for TV. Also, look forward to a great cockroach vs. hamster chase sequence.

Creepy Crawlers (I think the official title is actually They Nest but Creepy Crawlers is the DVD I got) is a wonderful little animals run amok movie with a great personality. The climax has a great setup, but it needed just a bit more tension to make it really explosive and satisfying. Otherwise, really fun movie! I loved it!

Posted by Michele (TheGirlWhoLovesHorror) at 4:42 PM