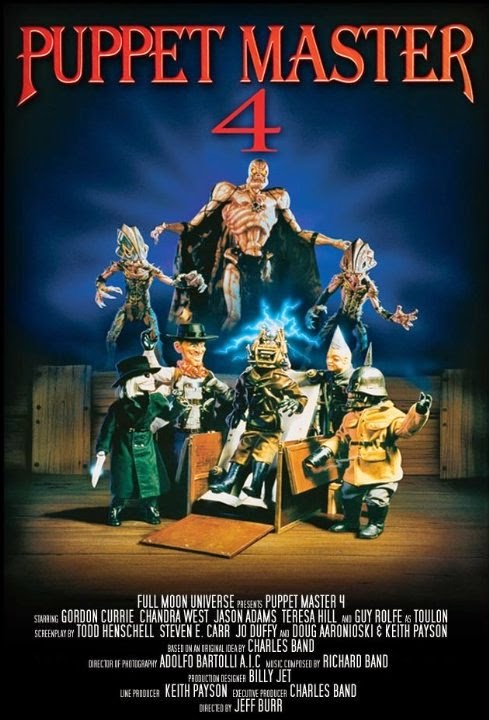 I seem to have spoken too soon about the increasing quality of the Puppet Master series. This fourth installment was a bit of a step back from the improvements that Puppet Master 3 made to the series, despite the fact that it gives us a lot more information about the series. We are slowly but surely peeling back the layers of the story, and though I'm less than impressed with Puppet Master 4, I'm still excited to learn more. 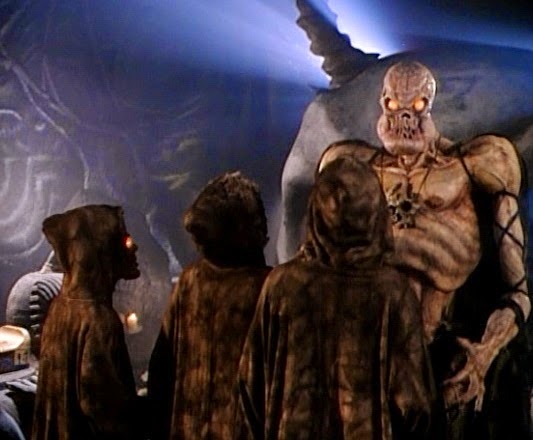 Puppet Master Andre Toulon's dolls are brought back to life by a young scientist named Rick, who is doing research on artificial intelligence in robots. The puppets must help Rick fight against three diminutive minions sent by the demon Sutekh to kill all those on Earth - including Rick - who are in possession of the secret magic of reanimation.

In the jumbled timeline of the series, Puppet Master 4 falls in sometime a little after Puppet Master 2... so far. Crazy things could happen later on, I don't know. The plot of the film is a bit jumbled itself, introducing a whole new set of (boring) characters and bringing up a plot point in the backstory that has never been mentioned before. It's a nice balance between keeping the movie moving in the present day and revealing more information about the mythos. 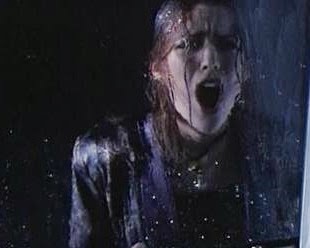 The movie takes place again at the Bodega Bay Inn, where Rick is working as a caretaker in the off season while doing his AI research. On the night that his friends Suzie, Lauren, and Cameron come to visit him, they discover Blade and the other puppets that have been stored there, along with Toulon's diary and some more of that magic green stuff. It's a bit of a happy coincidence that they reanimate the dolls at the same time that Sutekh is after Rick and his colleagues - two scientists who are killed in the first scenes of the film.

The life-giving magic has thus far been established as Egyptian in nature, but the new information that Puppet Master 4 gives us that those same Egyptians worshipped this "demon lord" Sutekh. He's a kind of Skeletor-looking guy with glowy eyes who can talk without opening or moving his mouth, and I guess he is the one who came up with the secret formula for the reanimation potion. Had the movie made this guy the main villain instead of those two-foot high spiny demons, I think things might have been more exciting. The demons might be mean, murdering little bastards but watching three full-grown adults cower in fear of them while letting the puppets fight their battles for them was a little sad to watch. 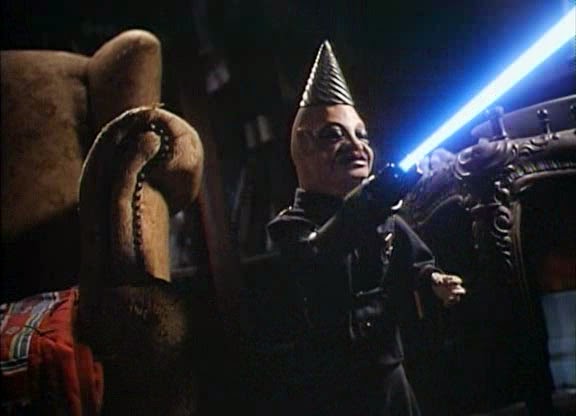 Also new to this movie and the series is the puppet Decapitron. His name makes him sound super bad ass, and he is the only one who is able to defeat Sutekh. He puts this thing on his head that somehow channels electricity and manages to blow up the last of the minions. Also in addition to his interchangeable heads is the fact that Toulon's spirit or something can be channeled through Decapitron, as Toulon's head appears on the doll's head from time to time to talk to Rick. Blade, Tunneler, Six Shooter, Pinhead, and Jester are all present in this fourth installment, but none of them really get to do much in comparison to the earlier films. They are mostly treated like toys by Rick and his friends, although the one scene where they are playing laser tag with Rick is pretty cute. The tagline for this film was "when bad puppets go good," and really, I like them either way. When they're bad, they're fun and when they're good, they're fun. They're heroes and villains. Like the Terminator. 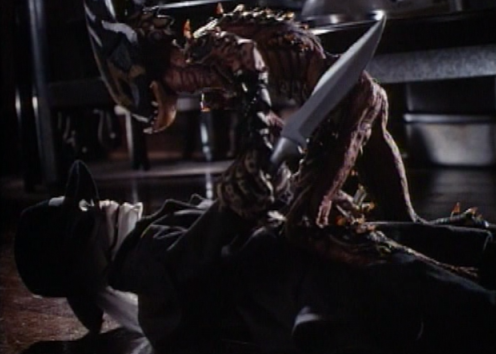 The most likable person in the group of human characters is Suzie, played by Chandra West. This is mostly because she is one of those female characters that totally keeps their cool in horror movies. Just because the movie wasn't weird enough, the filmmakers made the other female character Lauren a psychic, which is what allows the group to find the dolls in the first place - and also what lets the minion demons into the hotel in the first place when Sutekh is able to possess her or something. So she's helpful and not so helpful at the same time. Cameron is played by Ash Adams and is a pretty smarmy guy, jealous of Rick's genius. He does, however, get the best line in the movie when he and Rick find a Nazi pin in Toulon's possessions and this exchange happens: "A Nazi?" "I hate those guys!" There is also a great part where Cameron gives the most hilarious high-pitched scream I've ever heard a guy make.  Wish I had a video of that. Rick himself is just your average nice guy geek, and there's nothing particularly interesting about him. This is especially disappointing when Toulon (his head appearing on Decapitron) informs Rick that he will be the new Puppet Master, put in charge of keeping the formula a secret. Oh goody.

Puppet Master 4 is a decent entry to the series, although bringing in this whole other crazy demon element was slightly confusing for a while. Eventually it gets a little better, but it's still not up to par with its predecessor, Toulon's Revenge. Almost halfway done with the series! I'm feeling good.

Posted by Michele (TheGirlWhoLovesHorror) at 5:41 PM