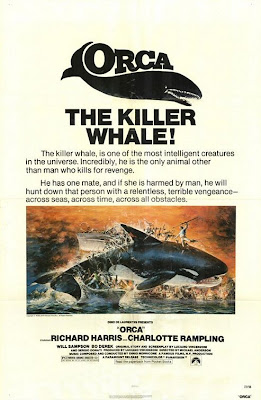 So while I was watching Orca the other day, I hadn't really planned on writing a review for it. However, I simply cannot let this movie go. Orca: The Killer Whale is... my goodness, this thing is an atrocity. This is not the way to respond to a blockbuster like Jaws, this is a way to make everyone whoever sees this movie take vengeance on those that made it for so hurting their psyches with this rubbish. Alright let's get into it and get this over with. 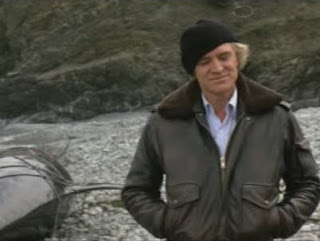 Captain Nolan is trying to catch a great white shark to sell to an aquarium. But when he witnesses an orca, or killer whale, attack a shark, he decides that capturing one of them will be more profitable. He gets himself in deep trouble with the animal, however, when he kills its mate and unborn baby, the orca vows vengeance.

No, seriously. I swear to goodness that that is what the movie is about. How ridiculous is that? I thought Jaws: The Revenge was bad enough with its similar storyline, but holy hell, Orca: The Killer Whale just goes so far beyond ridiculous. Perhaps I'm mad at the movie because of my love for Free Willy because, honestly, who doesn't love that 90s feel-good movie? I was 26 years old when I got all giddy after finding the Free Willy DVD pack at Wal-mart. It's one of my favorites, not gonna lie. So now here comes this piece of shit that turns these beautiful and intelligent creatures in vengeance-filled assholes. That's not cool. 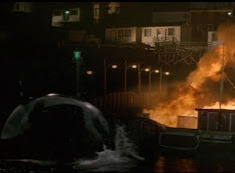 You all should know I love me a good animals-run-amok piece but I definitely did not love Orca. I don't even feel the need to remark on the acting, or the fake orcas vs. the real orcas, or anything other than how stupidly the orcas are portrayed in this movie, and what the filmmakers want us to believe they are capable of. First of all, the orca is able to pick out Nolan on the deck of the ship as the one responsible for the death of his mate and baby - not any of the other guys. Just Nolan. He sorta gets imprinted in the orca's brain and from then on the whale always knows where he is and has this whole elaborate plan to get his revenge.

Thus begins Father Orca's scheme to ruin Nolan's life. His continual presence makes the other fishermen pissed at Nolan because the orca is scaring all the fish in the area away. The orca attacks all the fishermen's boats in the harbor (except Nolan's because, as they theorize, the orca wants to fight him on the water... okay, sure...). The orca starts an explosion. The orca knocks out the support beams on Nolan's rental house, making it fall into the water. The orca bites off Bo Derek's leg. The orca eats another of Nolan's crew members. Now, I knew orcas were smart but this one must be the smartest goshdarn whale in the water. It boggles the mind, yes? 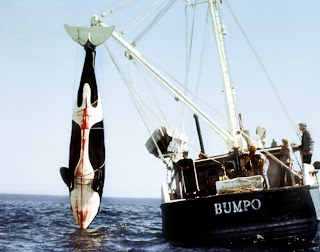 There was one thing I actually loved during all these orca-on-a-rampage escapades. Like I said before, this beyond brilliant whale is actually able to execute a very effective explosion. Amazing, right? He leaps out of the water to precisely bust the gas lines which leads to a huge explosion on the island. The really awesome part is all the different shots of the orca sort of triumphantly leaping out of the water several times (in a composite shot) as the fire rages behind him. I couldn't help but imagine him saying something like, "Boo-ya!" every time he jumped. It was hilarious, trust me.

The absolute worst part of this movie (and trust me, there are many to choose from) is the god-awful ridiculous, and slightly traumatizing, scene where the female orca gives birth on the deck on the deck of the ship. This isn't a sweet, miracle of life birthing scene either - the mother is half dead, hanging upside down above the ship when the little pink fetus kind of poops out of her. It was another one of those times when I was so stunned at the stupidity that I wasn't sure whether I should laugh my ass off or throw something at the television.

But all that is only part of the crap this movie has to offer, my friends. The whole last third consists of the orca actually leading Nolan and his crew to their final battle ground of some polar ice caps or some shit. The orca tips an ice sheet that Nolan is standing on, sliding him into the water, then picks Nolan up with his tail and throws him against an iceberg, finally killing him. It's actually not all that bad of an ending - just how the movie ended up there is the stupid part. And as stupid as it all is and as much as I didn't like this movie, I must say that you all need to see Orca: The Killer Whale. You must see what I have seen to believe it.

Posted by Michele (TheGirlWhoLovesHorror) at 3:52 PM