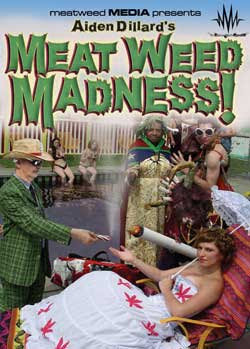 And just what, pray tell, did I ever do to deserve this? Do I seem like the kind of person who wants to watch pot-smoking cornballs just doing a bunch of crazy shit on camera and calling it a movie? Apparently, Alec of Mondo Bizarro thinks that I am, for he hath bestowed upon me the drugged out insanity that is Meat Weed Madness. That was an hour and a half that I could've spent, like, doing something way more productive on my day off, but it is my Project Terrible duty. And though I could've just lied, I actually watched this whole damn thing so you all better appreciate it. 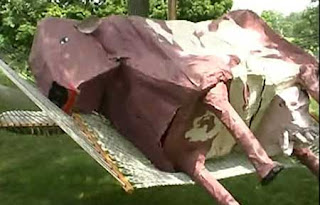 I'm not even entirely sure that there was a plot to the, uh... the thing I just watched. If there was, I must have missed it in between the scenes of a purple, stop-motion, papier mache cow walking around a field, lying in a hammock and then getting hit by the main "actress"'s car. Don't believe me? Look to the left! That is an actual still from the movie! But hold the excitement for now, because purple papier mache cows are only the beginning with this movie, and they've still got plenty more time to bombard innocent viewers like me with more and more and more and more whacked out shit.

Let's see what I can remember... there's the papier mache cow humping a tombstone; an ape playing the piano; two knives having sex; a naked chick trying to make love to a painting; several naked people doing dirty things with lawn jockeys; a guy with a penis rocket; and a minotaur named Bullpucky who always carries around a giant cigarette. I'm still trying to block out the rest of what I saw. Anyway, the "filmmakers" somehow decided that all of this would go really well together in a movie. Ha, I said "filmmakerS" when really this Aiden Dillard guy's credit says "Produced, Written, Directed, Edited, and Music by Aiden Dillard." So basically it's this one fool behind a camera with a bunch of druggies for actors who didn't have anything better to do on a Saturday afternoon. Excellent cinema. 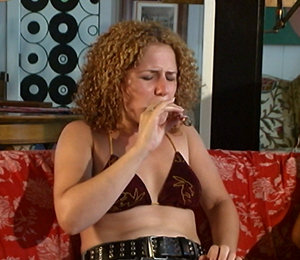 Wanna know what "meat weed" is? Of course you do. It's weed... with meat in it. But not just any kind of meat - no, it's human meat. The aforementioned Bullpucky (who is the son of a woman who had sex with a cow? Did I understand that right?) is apparently the muscle of Meatweed Manor, where all this wacky tobacky is created under the leadership of Lord Meatweed, and he kills people after letting them have a little bit of fun at the manor first. I was slightly amused when he kills one of the four main girls, Angel, and they make absolutely no attempt to hide the fact that they are using a crudely made papier mache doll (there's that papier mache again) for when he is stabbing her and pulling stuff out. I think at one point there is even a shot of the doll with a bald head - even though the actress clearly has long brown hair. 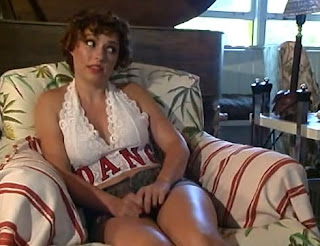 Now these four girls must be interesting people in real life to get themselves involved in this. For three of them, they're only job for most of the movie is to not wear clothes, make crude comments, and run around place as if they were bipolars having the most awesome manic episode of their lives. As one Netflix reviewer put it, "There are also lots of Troma's trademark naked girls who's [sic] mediocre looks are made up for by their hilarious enthusiasm." Couldn't have put it better myself.

There was about two seconds of the film that I actually liked - and believe me, that's saying something - and that is when Lord Meatweed is showing Jessy Belle around his plantation and there is a shot of these two older ladies in a greenhouse smoking the meatweed. They're dressed like they're sitting down to tea, but surrounded by a cloud of smoke. I thought that was hilarious. Those ladies had to have been somebody on the cast or crew's very loving, very understanding aunt or something to agree to do something like this.

Okay, I've already spent too much time on this movie. I'm sure none of what I just said (typed) makes any sense to you, but that's okay. That's how I felt when I was watching the movie. Meat Weed Madness is a Troma film for sure, and though we'd like to, I don't think there is any way to get those people to stop making terrible movies. Drugs are bad, people. Drugs are bad.

Posted by Michele (TheGirlWhoLovesHorror) at 2:39 PM