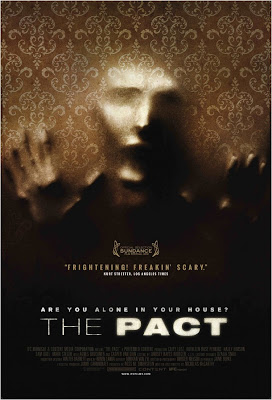 For a girl who loves horror movies and more specifically loves her supernatural horror movies, I seem to constantly be jonesing for something to affect me on that physical level of fear, even if it's only for a moment. The Pact barely made a buzz around the horror circles as far as I can tell, yet for me it was one of the best little movies from 2012 that I'm now frantically trying to catch up on. On the surface, The Pact might seem like your standard haunted house fare, but I think it has enough of its own thing going on to make it one to see. 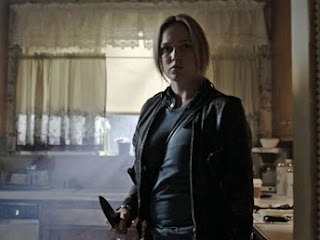 At first Annie does not want to return to her childhood home for her abusive mother's funeral. However, when her sister Nicole has apparently gone missing from their mother's house, she reluctantly goes back to sort things out. A malevolent presence makes itself known in the house and Annie finds herself drawn into a mystery that is closer to her than she thought.

The Pact is a genuinely scary, interesting haunted house flick that is well-written and well-executed on almost every level. Yes, it is guilty of using SEVERAL haunted house/ghost/supernatural movie cliches, but on my first viewing of the film, the scares were very real. It sort of follows the typical plot of girl encounters ghost, ghost gives girl clues to a mystery, girl becomes a little detective and solves the mystery of the ghost's murder. Blah blah. And while I was still enjoying the film while this was going on, The Pact manages to put an amazing twist on the story that about had me falling out my chair with fright. Of course, this kinda makes a second viewing of the film not as effective, but it is nice to go back and figure out some scenes from a different angle. 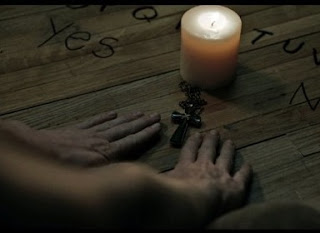 The movie doesn't spend a whole of time messing around with any kind of backstory for the main characters, and in fact, not even Annie's detective work into the mystery answers any of those questions either. A lot is left open in this movie, which is going to frustrate some obnoxious people, but I sometimes like a movie that makes me come up with my own scenarios. Given the twist at the end, what happened to those girls when their mother locked them in the closet? What did they see or hear?

The actress playing Annie, Caity Lotz, at first seemed to me to kind of stiff and boring but she totally grew on me after a while. She's an average looking girl, beautiful in her own way, and while her emotional range still needs a bit of work, she carries the film like a pro. All her reactions to her ghostly encounters are believable, I just wish she had given us something to reveal what her childhood with her mother was like, because by the end, that was the part of the story that I became the most interested in. She also has beautiful, long blonde hair - and I don't know about females watching the movie, but the part where she gets her hair tied to a pole in the closet made me squeak a bit. Not a cool thing to do to a chick. 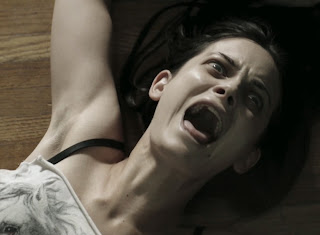 Speaking of ghostly encounters - holy fuck me, did this movie have me whimpering like a little girl at parts. I mean, that's what ghosts kind of do to me anyway, it's just the specific images that Annie sees of the ghosts in the house and one sorta-dream-thing in her hotel room are so very creepy and come out of nowhere. A headless ghost and a ghost spinning around on the ceiling were two big highlights and images that I couldn't get out of my head for a while. When everything else about the plot was so formulaic of other ghost movies, I really wasn't expecting The Pact to have the effect on me that it did.

I love the twist. Here be the big SPOILER, though I'm not usually one to warn. Turns out, there is a ghost in the house... and somebody else. Like, a live somebody else. Annie's mother's brother, the Judas serial killer, is still living in the house and of course, has been there the whole time that Nicole and Annie and Liz were. Even when the cop was killed, I did not see that one coming. This is where the movie really hooked me, and actually the exact second was when I about lost my shit when Judas started climbing out from the trapdoor in the secret bedroom. Think back near the beginning of the movie at some of those supposedly "ghostly" things happening in the house - the open closet door, the jar of food on the floor - and you realize that only some of it was the ghost and some of it was actually Judas moving around the house. That's pretty cool if you ask me. And fucking creepy.

My ghostie-loving self is so happy I saw this. Do not be fooled by the ghost-movie standbys that The Pact uses - the creepy psychic, playing Ouija board - because once you find out what's really going on, you're in for a really good time. I was beginning to think that good ghost movies just weren't going to happen anymore but The Pact changed my mind. See it.

Posted by Michele (TheGirlWhoLovesHorror) at 3:01 PM