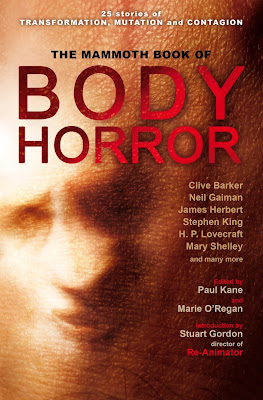 Yeah, dudes. Horror books. They're almost as awesome as the movies. Almost.

So anyways, when I ducked into a Barnes and Noble a few months ago looking for some books by particular authors that they didn't have which is why I don't like going to Barnes and Noble... I found this. The Mammoth Book of Body Horror. I've seen a lot of these Mammoth Book[s] of Whatever around but I don't think I need to explain why this particular one caught my eye.

So after I'm done going all "Hmmmm..." over the cover and the impressive list of authors upon it, I open up the book to look at the table of contents, which is as thus:

Transformation by Mary Shelley
The Tell-Tale Heart by Edgar Allan Poe
Herbert West - Reanimator by H.P. Lovecraft
Who Goes There? by John W. Campbell
The Fly by George Langelaan
'Tis the Season to be Jelly by Richard Matheson
Survivor Type by Stephen King
The Body Politic by Clive Barker
The Chaney Legacy by Robert Bloch
The Other Side by Ramsey Campbell
Fruiting Bodies by Brian Lumley
Freaktent by Nancy A. Collins
Region of the Flesh by Richard Christian Matheson
Walking Wounded by Michael Marshall Smith
Changes by Neil Gaiman
Others by James Herbert
The Look by Christopher Fowler
Residue by Alice Henderson
Dog Days by Graham Masterton
Black Box by Gemma Files
The Soaring Dead by Simon Clark
Polyp by Barbie Wilde
Almost Forever by David Moody
Butterfly by Axelle Carolyn
Sticky Eye by Conrad Williams

Well, blow me down! The last fifteen or so were kind of lost on me, but I didn't care because I knew I was going to buy the book just for three specific stories that I've always wanted to read - "Herbert West - Reanimator," "The Fly," and "Who Goes There?" (the story that The Thing is based on). And they were all awesome, and it is very nice to have them in one collection instead of three different ones.

Many of the other stories were nice surprises, as well. I must say that Richard Matheson's " 'Tis the Sesaon to be Jelly" was my favorite out of all of them. People might read that one and not know what the hell is going on but I totally got it and thought it was a brilliant way to present the story. "The Body Politic" by Mr. Awesome Voice Clive Barker is a very subtly funny, but simultaneously serious story about when a man's hands literally rebel against him and the rest of his body.

As for the rest of the stories, here's what you have in store for you if you read it: Robert Bloch pens an interesting yarn about Lon Chaney; Nancy Collins freaks us out with a story about a photographer who looks for circus freaks; James Herbert gives a teasing look at the "Others"; Christopher Fowler shows how grotesque and dangerous fashion can be; Graham Masterson tells a doggedly romantic and weird tale about love and revenge; and Barbie Wilde introduces us to bowels gone bad (no, seriously).

So, if you body horror fans need something to pass the time at the doctor's office or on your lunch break, then I think The Mammoth Book of Body Horror could be for you. I may sound like somebody is paying me to say all this, but it's totally true. Some real gems in this collection, classic and not, and I enjoyed the heck out of it.

Posted by Michele (TheGirlWhoLovesHorror) at 5:57 PM