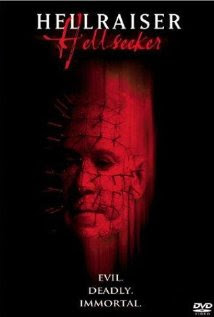 Deadlines and changes have been happening lately, and sometimes they get in the way of other fun stuff I want to do and know I should do - like finishing watching that franchise I started whenever the fuck ago. Rest assured that I have not forgotten about my Hellraiser journey, fiends, so I'm back with it again - FINALLY - and the sixth installment in this kooky series, Hellraiser: Hellseeker.
﻿ 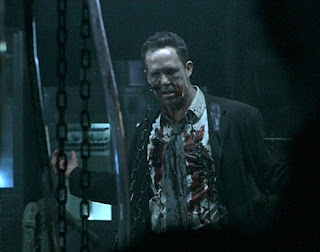 I had to watch the movie again to write this review, and when I first watched it a few weeks ago, I wasn't really sure how I felt about it. This was weird, because for a good chunk of the movie, Hellseeker plays out a lot like the twin version of the previous installment, Inferno. I really loved that one, and Hellseeker has a very similar plot line. But I think it might be the ending that throws me off just the slightest bit.

Hellseeker sees the (real) return of Ashley Laurence as Kirsty, but the main focus is on her husband, Trevor. In the beginning of the film, Kirsty and Trevor get into a car accident that sends them over a bridge and into a river, with Trevor surviving and Kirsty being trapped in the car underwater. However, her body is missing from the accident site, and ever since the accident, Trevor has been experiencing terrible headaches and vivid hallucinations, all while being pursued by two detectives who think there is more to the story than Trevor is letting on. 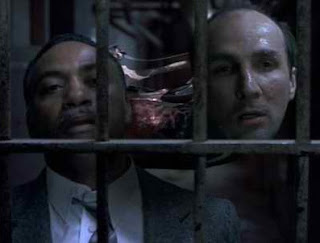 Dean Winters (whom I absolutely love because of Law and Order: Special Victims Unit) carries the film well as he goes through the motions made familiar by Inferno of a guy hallucinating all kinds of strange stuff. Trevor is an unreliable narrator who spends the entire movie going from one fucked-up situation to the next without much string holding it all together. All of this does have a purpose later on, but you will most likely be spending the first two-thirds of the movie wondering what in the blazes is going on. And like Trevor himself says, when a scene starts, you don't know what's real and what's not until something happens to let you know one way or another, and even THEN, it's hard to tell what might be real because even the really weird stuff can be real in a Hellraiser film, you know?! 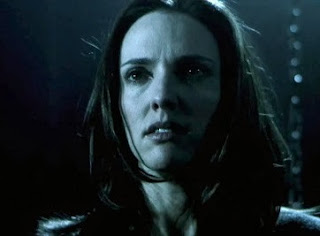 Actually, what I really want to talk about with this movie is how the ending works with the rest of it, so I'm going to have to spoil everything right now. In a way, the overall point of the movie is not Trevor at all - it is Kirsty, even though she is only dealt with as a peripheral character. But knowing that she is a huge part of the Hellraiser story hopefully makes one think that her role in this story has got to be more meaningful than just being Dean Winters' wife (although that's not really a bad role to have). Pinhead and the Cenobites were after Kirsty because they're still all hungry for her soul and stuff, and they got to her by going through Trevor. She makes a deal with them to give them five souls in exchange for hers. She uses this opportunity to take revenge on her cheating spouse, who also happened to be in cahoots with another girl to kill her and take her money. It's a fine story, and certainly explains all the weird shit that had been happening to Trevor in the movie - the accident scene at the beginning is retold to show that Kirsty shot Trevor, so he has been dead this whole time and the movie is him suffering through his personal hell. This is obviously why I compare it to Inferno so much, and what is also making it difficult for me to say which movie I liked better, if I ever had to. As third and fourth sequels to a horror franchise, Inferno and Hellseeker are pretty damn good, well done films. 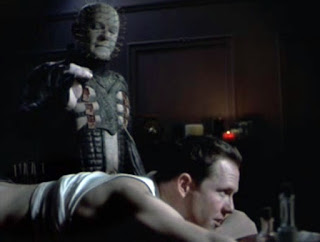 What irks me a bit in regards to the characters of Kirsty and Pinhead is that Kirsty survives yet again by making a deal with Pinhead YET AGAIN. He's all like, "I'm totally gonna take your soul this time!" and she's like, "Um, how 'bout I give you this instead?" and he's all, "Okay." If you all pull this shit again in another movie, I'm going to go ape. I don't even really believe that it happened this time. This honestly should have been the end for Kirsty and she shouldn't have been able to get away with it. The fact that she did diminishes Pinhead in a way, and, even though he's a villain, he's a villain that we really like and to me, this makes him look weak. I don't want a weak Pinhead. I also don't like what this does to Kirsty as a character. She was fucking awesome in the first and second movie, and now she's gone a bit too dark and far away from her character by using her scorned wife status to kill five people - three girls that Trevor was cheating on her with, the co-worker that he was planning to kill her with, and Trevor himself. This isn't the Kirsty I love.

Other than that, Hellraiser: Hellseeker is a really solid sequel with a great story and some cool visuals, which I didn't even get into talking about here. I like the personal approach that these sequels are taking as opposed to something more high concept, because I don't think that would have been as interesting thematically. Bring on part 7, let's finish this!
Posted by Michele (TheGirlWhoLovesHorror) at 5:44 PM