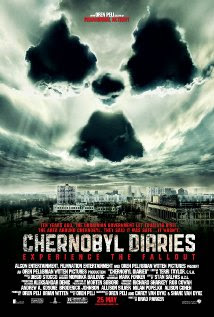 So I don't know how these movies that everyone tells me I'm supposed to hate keep creeping onto my good side. No, there's nothing particularly special about Chernobyl Diaries and it did in fact show up on more than one "Worst of 2012" lists, but it's not really all that bad. It's watchable, though not without its problems. Once the story goes deep into the shit, as it were, the filmmakers start to rely on too many cliches and foreseeable plot turns (especially the ending). However, I couldn't help but like that it does manage to give viewers a basic plot premise and location not often seen in movies like this. 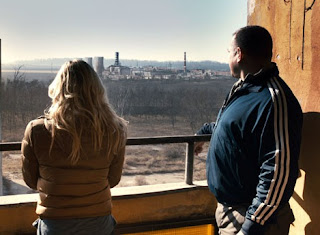 Chris, his girlfriend Natalie, and friend Amanda arrive in the Ukraine to visit Chris's brother Paul on the way to Moscow. Paul convinces the group to instead go on an "extreme tourism" excursion to Pripyat, an city abandoned 25 years ago after the Chernobyl disaster. Led by Uri and joined by newlyweds Michael and Zoe, they head to Pripyat thinking they will be the only ones there. Soon their vehicle is tampered and they are trapped in the town, soon finding out that they are definitely not alone.

When I first saw TV spots for Chernobyl Diaries, I think I and everybody else was expecting it to be a found footage movie. But it's not. But it is, sort of. During the opening credits, there is personal video footage of the group at several famous locations while they tour Europe. Then the camera switches to the standard third person narrative, but somehow they do it in a way that totally makes it feel and sometimes look like found footage. It was something to do with the camera angles and positioning. Another thing I thought this movie was going to be about was ghosts. Yup, I thought the thing roaming around Pripyat was like, ghosts of the victims of the exploding reactor or something. Well, it's not about that and I still don't know for sure whether that would have better or worse for the movie based on how it actually turned out at the end. 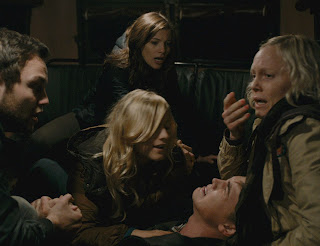 Despite being the all-too-familiar cast of young hotties, I liked all the actors and their performances. I thought at first that the guy playing Paul was going to be the good-looking douchebag but he turned out to be alright. I was happy to see that there were no other cliches - no whiny girl, thank goodness. Michael's voice sounded familiar to me but his look was so different that it took me a while to place him as Nathan Phillips, who starred in Wolf Creek. He's cute and likable, as is everybody else - nothing really all that standout, but passable, even if there is no character development for any of them.

One scene I totally have to give the movie points for is the bear scare. Seriously, call it undeniably stupid that they suddenly had a full grown bear come running down the hallway of an apartment building, but I don't think you can deny that it was wholly unexpected! That turns out to be the only scare in the movie, though. They had a chance at another good one but they sort of ruined it. After finding randomly finding Natalie again, the group comes upon a little girl just standing there. They try to get her attention and the audience is expecting a scare to come from her but they make the mistake of showing a creature in shadow down the stairs where Natalie is crouched. So now we know that the scare is going to happen there and the suspense is totally ruined. Bad move. 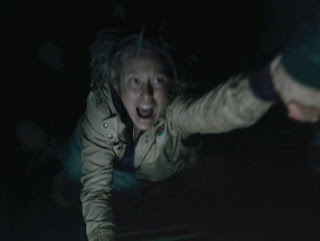 When I saw the deformed, half-dead fish by the lake, I was a little disappointed that that was as far as they were going to go. And, okay, well that really is as far as they went because the radiation-mutant things aren't seen all that much. They move too quick are never seen fully on camera to get a good enough appreciation of what happened to these people and what is possibly in store for our main characters. From what little I did see though the effects were not anything special and could have actually been a bit more extreme, if only just for cheap shock value. This movie could have could have done with more of that to give it that extra bump in excitement.

I would still like to give Chernobyl Diaries points for ingenuity in the plot idea, but the rest of the movie is... meh. That's really the best way to describe it - meh. I don't think it's completely horrible like others say because I found it to be at least watchable and interesting, with some decent characters... even though neither the plot or the characters has any real depth. The ending is beyond predictable, and it really disappointed me that they went the old science-experiment-gone-wrong type of way instead of finding a new or different explanation. Anyway, you're not really missing all that much with this movie.

Posted by Michele (TheGirlWhoLovesHorror) at 2:18 PM