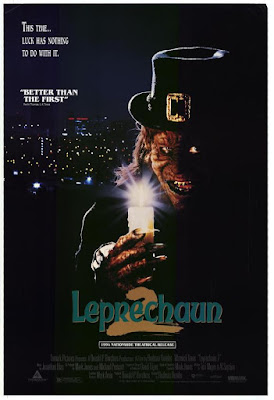 Leprechaun 2 is the next in what I'm guessing will be a long line of weird movies in this franchise. But I think I knew that before I signed myself up to do this so I have no one to blame but myself. The movie is a bit erratic and again odd, but it's still kinda fun. However, it's also one of those movies where once is enough and you really don't need to see it again. 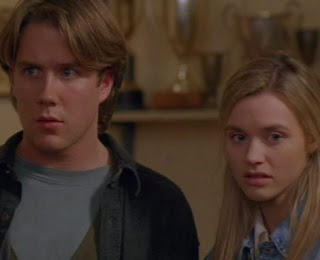 A thousand years ago, the nasty little leprechaun was thwarted out of getting his bride by his slave William O'Day. But the green guy put a curse on O'Day that in another thousand years he would wed someone in his bloodline. So now he's back in present day Los Angeles, seeking out young Bridget to take for his wife, and she and her boyfriend Cody - who stole one of the leprechaun's gold coins - must figure out a way to save both of themselves.

So this was definitely an interesting new place to take the Leprechaun story. I will say that it was a really good idea for the writer to give the leprechaun a different mission this time around rather than just getting his gold back, which we just saw in the first film. It's icky to think about, especially the mentions of the "wedding night" and making little leprechaun babies, but I guess everybody needs love. The setting in Los Angeles is cool, too, but they don't really take much advantage of it - definitely not in a Jason Takes Manhattan way, which might have actually been fun. Instead, we get random settings at a bar, a go-kart place, and the leprechaun's home inside a tree. 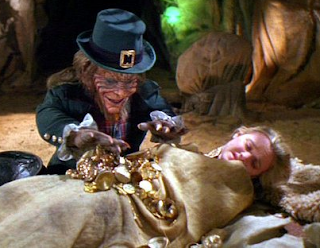 One thing that's cool to see when you're watching the movie now is all the different little cameos that pop up in the film. In one of the first scenes, Clint Howard and Kimmy Robertson (whose name I did not know until now, but whose face I've seen everywhere) play a couple of tourists; Tommy Cox of Bad Santa shows up at the bar; and perhaps most hilariously, Michael McDonald from MadTV as the guy in the espresso bar. Our main cast is a couple of unknowns who are mostly pretty good, but then again, this is Leprechaun 2 so don't look to be particularly wowed by any of the performances or anything. Shevonne Durkin is pretty cute at Bridget, and Charlie Heath as Cody is the perfect boyfriend who would do anything to save the sweet girl of his dreams. Warwick Davis returns and he's of course just as glorious as ever. 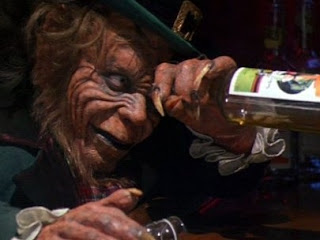 Cody's story is that he is in business with his alcoholic uncle Morty and the two of them run a sham tourist attraction called Darkside Tours. They travel to various death houses in LA, one of them being the remains of Harry Houdini's place, where the leprechaun has made his home inside the tree. Cody and Morty are therefore very good at conning and tricking people, just like the leprechaun is, so this makes for a good setup for some trickery that happens as the plot moves along. One of these tricks is getting the leprechaun drunk, because apparently they can't hold their liquor, so that's a funny and weird scene, especially with all the other little people at the bar celebrating St. Patty's Day cheering the leprechaun on, chanting "One of us, one of us!" Bit creepy. Other than that, most of the movie is just a long cat-and-mouse chase where the leprechaun shows up, the characters get away, they get to a new place, and the leprechaun shows up again. Once everybody else is dead, it's just Cody and Bridget in his treehouse where they run around for a while and keep getting lost. It's not terribly exciting. 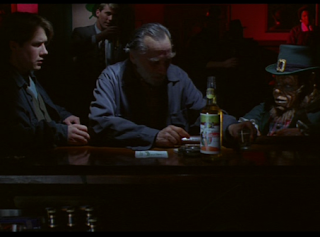 Though there's nothing as awesome as the pogo stick death, Leprechaun 2 has its killing moments here and there that you won't find in many other horror films. After Morty gets him drunk at the bar, the leprechaun heads to a coffee shop to sober up, and McDonald is very rude and annoying so of course he has to die. He gets his hands impaled to the table and then dies by getting a blast of steam from the espresso machine in his face. Death by espresso machine! This is why I love horror movies. Other interesting moments are the guy who gets his finger ripped off so the leprechaun can take his gold ring ("Finger lickin' good!"); when Morty makes the fatal mistake of wishing that he had the leprechaun's gold and the pot grows inside his stomach; and the leprechaun's own death at the end when he is stabbed by wrought iron (the only thing that can hurt him) and then freaking explodes. Movies should always end with somebody exploding, I say. The guy who puts his face into the spinning blades of a lawnmower would have been cool too if they had shown any of it.

Leprechaun 2 is a movie that's fun for the moment, but it's not the best kind of sequel there is. There's nothing particular memorable about any part of it - the characters, the kills, the plot. It's not hard to see why Leprechaun 2 was the last movie of the series to be released theatrically (thanks, Wiki) but they obviously continued on with more films, so bring 'em on!

Posted by Michele (TheGirlWhoLovesHorror) at 11:07 AM