Movie Review: Your Vice is a Locked Room and Only I Have the Key (1972) 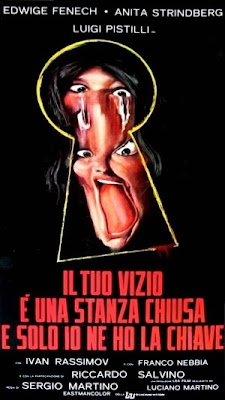 How strange that I should watch this movie in such close succession to watching Lucio Fulci's The Black Cat because both films claim to be based on the Edgar Allan Poe short story "The Black Cat." Of course they changed the title a bit for today's film, obviously because Your Vice is a Locked Room and Only I Have the Key is much more simplistic, easier-to-understand title. I seriously have no idea what that title means. How can somebody's vice be a locked room? Am I misunderstanding the definition of "vice"? 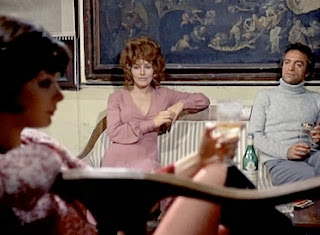 In a palatial but dilapidated villa, failed writer Oliviero Rouvigny lives with his wife Irina where he throws decadent parties every night with a local hippie commune. He drinks heavily and humiliates and abuses Irina whenever he can, and obsesses about his dead mother. When a local girl Oliviero had relations with is found murdered, he becomes the prime suspect, making him more paranoid and letting loose his sadism against his wife, who herself is falling deeper into depression and madness as well. There is also Oliviero's black cat, Satan, who used to belong to his mother and who Irina fears.

Sergio Martino was not before on my list of giallo directors to look out for, but after Your Vice, he definitely will be. This film is tightly shot and paced, with hardly any lulls in the story and almost every scene has importance to either the plot or the arc of the characters. There is murder, of course, and free-flowing and sometimes perverse sex, but that never detracts from the core story around Oliviero and Irina. Oliviero's niece Floriana comes into the story later, manipulating both of them to her own gains. Complex characters, a tight plot, and a murder mystery - the perfect recipe for a truly engaging and entertaining movie. 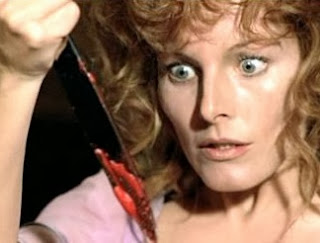 I'd be remiss not to comment on each of the three lead actors. Luigi Pistilli as Oliviero is almost terrifying in the emotionless way he carries out his various atrocities. He has such a calm demeanor throughout most of the movie that it is hard to watch him abuse his wife, molest his black maid Brenda in the middle of the party at the beginning, and, most of all, take up a sexual relationship with his own niece while he plots to murder his wife. Anita Strindberg's best asset as Irina is her face, full of sharp angles, a tight mouth, and wide, expressive eyes. You absolutely believe every emotion that she portrays with that face. Edwige Fenech (whom you might recognize as the art class teacher from Hostel: Part II) is the seductive and intriguing Floriana. Her role is an interesting one with the way she wedges herself in between Irina and Oliviero, actually having sex with both of them. We find out that the only reason she is there is to get her late aunt's expensive jewelry, but you can tell that she almost enjoys the sick things she chooses to do in order to possess them. 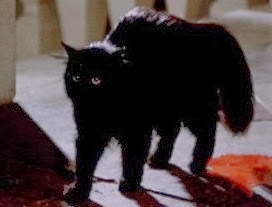 As a giallo film, I was expecting lots of lavish and beautiful death scenes. I was a tad disappointed in that regard, with only a few neck and chest slashings, but they were still filmed to look very pretty. Fausta's throat being cut was probably the most well done out of all of them, while the long gash from Brenda's chest to her stomach was too obviously a prosthetic. The bright red paint serving as blood, a giallo staple, is a great image and helps to overlook the fact that the other special effects are sometimes not up to par with the rest of the film. After Satan the cat kills some of Irina's beloved pet doves, she goes a little crazy and stabs out one of the animal's eyes. Subsequent scenes of Irina's obsession with the cat wanting revenge on her show a ghastly bloody hole where his eye used to be. It doesn't look all that real, but it's certainly memorable and gets the job done. 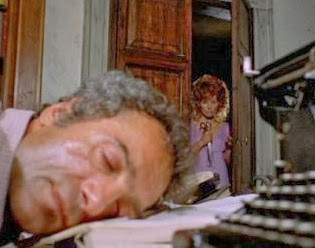 Poe's "The Black Cat" is a story about obsession, fixation, and paranoia, and cleverly crafted right up until the gleefully fitting end. Given the fact that in the story is was the husband who murdered his wife, and it was her cat that he was afraid of and tried to kill, I should have known right away that Irina was actually behind everything that happened. Bah, what's wrong with me? The film ends the same way that he story does - with Satan the cat revealing Oliviero's dead body behind the cellar wall - but it's hard to feel as satisfied about this conclusion because of the sympathy the audience probably has for Irina. Though she has planned and carried out several murders of innocents in order to get to her husband, she suffered under him, and there is no reason to have any sympathy for Oliviero. Eh, I guess justice was served on both sides.

Your Vice is a Locked Room and Only I Have the Key was more than a welcome surprise. I never know what I'm going to get with some of these giallos, but several times I have been happy that I gave them a chance. This was a great find, and I hope that there are many others like it out there.

Posted by Michele (TheGirlWhoLovesHorror) at 5:00 AM

Labels: Anita Strandberg, Edgar Allan Poe, Edwige Fenech, Luigi Pistilli, Sergio Martino, The Black Cat, Your Vice is a Locked Room and Only I Have the Key