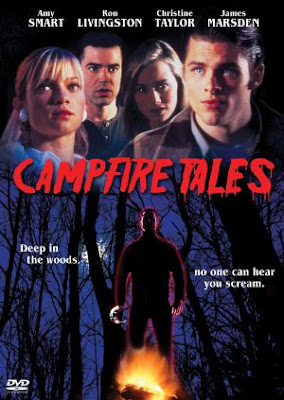 Campfire Tales is a horror film for wussies. It's like a slightly more mature version of an episode of "Are You Afraid of the Dark?". It's a horror film that you show to your non-horror friends when they don't want to watch something that's "too scary." And yet there are boobs, and blood, and some actually very creepy imagery. So I like it. There are also hot stars in some of their earlier roles, and they no doubt help pull off this movie that could have been so weak and forgettable. Campfire Tales is actually really good for what it is and one that at least deserves some mention for what it gets right. 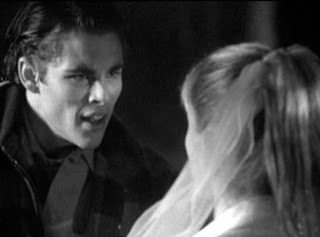 The movie starts off cold and actually rather confusing because it shows a completely unrelated story called "The Hook." James Marsden and Amy Smart are a cute black-and-white filmed couple in the 50s, making out in his car, when Amy hears noises outside and gets scared. Maybe because there's a dangerous guy in the area who carries around a hook! Mwhaha! Anyway, nothing happens to them but when they skedaddle away to a drive-in, there is a hook hanging from one of the doors. My guess is that since this section has absolutely nothing to do with the rest of the movie, its only purpose is to introduce the audience to the fact that the tales that are going to be told around the campfire are variations of famous urban legends. 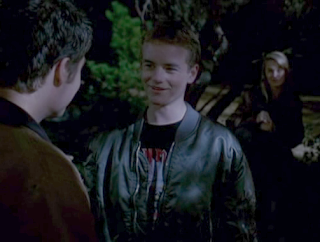 The wraparound story, just called "The Campfire," starts off with kids driving like idiots on a back road at night and of course getting into an accident. Always fun. They wander into the woods and end up in the ruins of an old church where they build said campfire and tell stories to scare each other. As the wraparound progresses in between each story, things get very odd and questionable. A horror fan with a more discerning eye could have spotted what was going to happen at the end of this, but when I first saw Campfire Tales many years ago, it completely took me by surprise. Watching it again, I still think some of the stuff they did at the end was clever, but it all just seems so obvious and maybe a little too silly. Ah, but the wraparound in an anthology is hardly ever as good as the spooky tales to be told. Campfire Tales offers us three such stories, and for once, I liked them all.

"The Honeymoon"
Rick (Ron Livingston, of Office Space fame) and Valerie (some chick that I've never seen before) are honeymooning by driving around in their RV. They take a detour to go to some tourist trap and run out of gas or something, I forget. They meet the obligatory creepy random guy who tells them that these parts o' the woods ain't safe at night because "they" will git you. The audience never really finds out just who/what "they" are, which is one place where this story is lacking. I have seriously no idea what was attacking these people and it pisses me off. The couple commits all the same old horror movie victim crimes - having sex (twice, might I add... it's their honeymoon, y'know), separating, going off into the woods alone, and not listening to the creepy random guy in the first place. 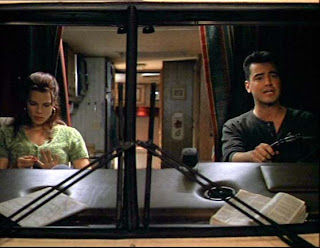 There is a small amount of tension as Valerie fights the unseen beings, and overall the story is a satisfying one. The urban legend part of the story doesn't come in until the end, when a police officer finds Valerie cowering in the RV the next morning. He leads her away, telling her to look straight ahead but she sees in a reflection the awful truth - Rick hanging upside down from a tree above the RV. This reveal is nice, and though the characters are believable and somewhat likable (it is a little funny when Rick runs outside naked at one point and yells out "I just had great sex!"), this story is still a little weird simply for the fact that I have no absolutely no idea what was menacing these two lovebirds all night. It seems like it goes a little bit into the realm of the supernatural, which is fine, but it perhaps would have been more convincing if the killers were deformed hillbillies or something. That sounds weird, I know. 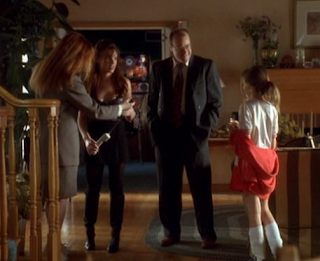 "People Can Lick, Too"
Straight up creepiest story ever. Chatting with people on the Internet is bad, kids, and if you don't believe your parents about that, watch this. Amanda's birthday is tomorrow and she's about to have a bad night when her sister and parents are out of the house and her Internet chatting buddy "Jessica" comes to pay her a visit. Of course, "Jessica" is actually a pervy and very scary older man with gross long gray hair. Nothing happens to Amanda, and in fact the only fatality is her beloved dog. It is the implications of what could happen and the audience's imagination that make this story effective. We all remember how scary it was to be alone at night when we were younger and this raises that fear to the nth degree.

This story is the whole reason why I wanted to talk about this movie in the first place because when I first saw it many years ago, that image where they reveal what "people can lick, too" actually means was permanently stuck in my brain. I mean, that is just... beyond wrong. That is freaking creepy and wrong, and unfortunately for the girl in this story, gives a whole other meaning to the monsters under the bed phobia that she has probably grown out of by now, but which is now going to be back with a vengeance. Just watch the story and be horrified. You'll feel me. 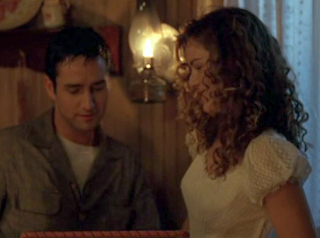 "The Locket"
Last up in our little anthology tale is "The Locket," a sad one for me to see because it stars the much-loved actor from "Angel" (and "Roseanne"), Glenn Quinn, who is no longer with us. Jacinda Barrett is also here in her first movie role, though unfortunately she doesn't get to say any lines. Boo for her. So anyway, it's a treacherous evening for motorcycle-riding cutie Scott when his bike poops out on him during a downpour. The nearest house doesn't have a phone, but it does have a beautiful woman named Heather whom Scott is instantly infatuated with. The house also has a story and a few ghosts haunting the premises... some of which may be closer than Scott realizes...

This is one of those ghost stories that is truly frightening and scary, but is mostly just sad. It's sad in the way that past horrors are doomed to be repeated over and over again and never let the souls rest even after all that they've been through. And though the ending to The Locket may at first seem like only an attempt at a gruesome shock, I felt the sadness in that moment, too. It's weird, but it got to me in some way. I think they found the perfect two actors to play these roles, as Glenn really plays the sweet-guy character to a T, and Jacinda's gorgeous looks and cascades of curly hair may make the all the girl's hate her, but every gesture and facial expression she gives is also very sweet and endearing. You can't help but love them both. Very good story to close the anthology.

So though Campfire Tales is at times weakly put together and edges very close to that line of campiness, it's a fun little collection of horror tales that almost everyone can enjoy at least once. There's nothing really special or unique about it but it is one that I think people can look back on and say, "Oh yeah, I remember that seeing little flick... It wasn't too bad!" And really, it's not. It's fun for what it is and is pretty successful at being a middle-of-the-road sorta-horror anthology.

Posted by Michele (TheGirlWhoLovesHorror) at 8:45 PM