Seeking Justice (2012)
So I don't know what is it with me and revenge movies, but apparently I will watch anything if it has to do with a family member seeking vengeance on someone who hurt a loved one. Maybe it's the emotional, dramatic side to that sort of story that I'm attracted to. Probably. So when I read the synopsis for Seeking Justice, I was all over it.

Nicolas Cage plays a guy who enlists the help of a secret vigilante organization to kill the man who beat and raped his wife. All they ask in return is a future favor that will help them on their mission, which of course doesn't turn out how Nic thought it would and ends up pitting him against the organization. So the problem with this movie was two-fold - 1) it stars Nicolas Cage, who I've never really liked anyway, and 2) it has no emotion. It should have its characters be so emotionally invested in what they are doing that it's heartbreaking, and instead the movie turns itself into a run-of-the-mill chase movie against the bald-headed bad guy.

This guy is Guy Pearce (who I LOVE) and he does the best he can with the role, but even he can't seem to get the emotional side right. Cage is the worst perpetrator of this. His reaction to his wife's brutal rape by a stranger is not what it should be for this kind of movie and does not match up to his hurried decision to kill the bastard. I just didn't feel it, and I needed to feel the brutality of the attack and the shattering of their lives to make Cage's decision seem plausible. None of that matters after a few minutes, though, because after the rapist is dead, the movie spirals downward into foot chases and car chases and Cage eluding the police while trying to bring down the organization. Ho-hum. You've seen it all before. It was boring then, and it's boring now. Nice try, Seeking Justice, but you really could have done a whole helluva lot better.

We'll see what Bob thinks of it in the next Project Terrible round in April :). 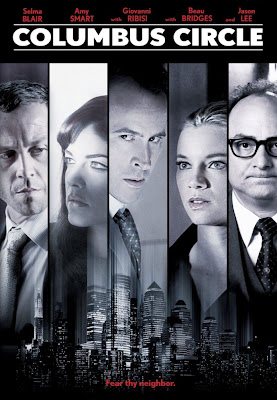 Columbus Circle (2012)
Columbus Circle was actually a pretty good little independent thriller I found on Netflix a little ways back. It is about an agoraphobic heiress who has spent 20 years alone in her apartment. When the lady in the apartment across the hall dies and a young couple moves in, she's forced to finally face her fears and interact with the outside world - which her new neighbors show her is just as twisted as she thought it was.

The cast for the film is an impressive one, at least for me: Selma Blair is Abigail, the heiress; Jason Lee and Amy Smart are the new couple Lillian and Charlie; Giovanni Ribisi is the detective investigating the neighbor's death; Kevin Pollack (who also co-wrote the film) is the concierge who helps Abigail; and Beau Bridges is Abigail's doctor and the only person she ever has real contact with. They all do a great job of weaving themselves through this tale that has as many twists as a Slinky, and they do it in a way that makes the story credible and believable, and really, quite clever.

Abigail is, unbeknownst to her, at the center of an elaborate scheme that I never even slightly predicted. However, once the first twist about her neighbors is revealed, everything else does fall in line how the audience would probably think it would. It doesn't hurt the film at all really, because it's still fun to see how the mystery is going to play out at the end, which turns out to be very satisfying. Some very good entertainment value here. This movie should have been played in theaters. 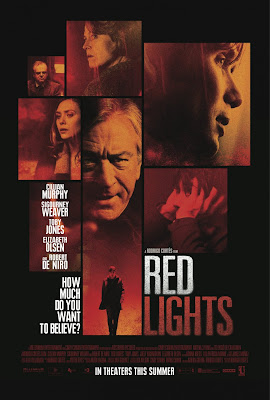 Red Lights (2012)
On the other hand, we have Red Lights: just the kind of the movie that gets all the theater buzz in the world and totally doesn't deserve it. But with a cast like Cillian Murphy, Sigourney Weaver, and super-ultra movie star Robert De Niro, did I really expect anything else? In Red Lights, Murphy and Weaver are two physicists who work on debunking psychic or supernatural phenomenon. Murphy becomes obsessed with proving that a famous psychic (De Niro) is really just a big fat phony.

Nope. Didn't like this one. Lots of pretty colors and showy theatrics, but that is exactly what was wrong with this movie. I really don't know what could have made it better, I just know that it wasn't my favorite and I pretty well forgot about it not too long after it was over - after I was done scoffing at the stupid ending. LAME.

Posted by Michele (TheGirlWhoLovesHorror) at 7:22 PM