Well, son of a bitch! I'm pissed. I'll tell you why: this whole movie was pretty much my idea, my pipe dream, but I didn't know that this movie existed until a few weeks ago. You see, for about six months I worked the overnight shift at my grocery store stocking shelves (word of advice: NEVER accept a job like this. It blows. Not the job itself, but the hours). Putting boxes of Trix and Cheerios on the shelf, I'd let my horror mind run away with me and start thinking about how a grocery store at night would be a terrific setting for a horror film, with the night crew being stalked throughout the store by a maniacal killer. I thought of all the nasty implements that grocery stores have that would make amazingly gory deaths - meat cutters, deli slicers, the fucking cardboard baler - and I thought, Hell yeah! This would be one kick ass horror movie and nobody's ever thought of it before!
... And then I decided to watch this movie Intruder

that Netflix recommended to me. Lo and behold, it's about a killer stalking the night crew at a grocery store. FUCK. There goes my big break.
Okay, I'm over it. On to the review. 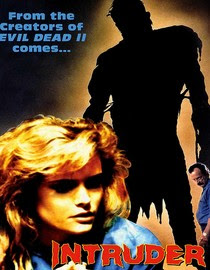 Clean up on aisle 9!: Intruder

starts just before a local grocery store closes for the night, and one of the cashiers, Jennifer, gets a visit from her psycho ex-boyfriend. It gets violent and the other guys working at the store soon boot him out and start work for the night. However, someone else is in the store too, taking out the night crew one by one in bloody ways.

First of all, this movie has the boring-est credit sequence I have ever seen. It consists only of a still shot of the moon as each credit fades in and out on the screen. Wow, what a snoozer. You'd think from this that the rest of the movie would be pretty bad, but alas this was only some clever trickery. For the rest of Intruder

is, quite simply, 80s slasher HEAVEN. It's not really that well made or anything, and that is precisely what makes it a-mazing.
I don't even know where to start on how awesomely bad and cheesy Intruder

is. Let's just take it from the worst choreographed fight scene in cinematic history. Jennifer's ex-BF is being all douchebaggy so the other dudes come running to help. Obviously none of them has ever been in a real street fight or taken a single hour of karate, so all their punches and holds look fucking awkward. There's also a lot of weird POV and high angle camera shots, but trust me, that's only the beginning of the weird camera work going on here.

At least director Scott Spiegel keeps the movie interesting looking by putting the camera in whatever weird place he can think of. So we get all these odd looking point of views looking at the characters - including from the floor underneath the dirt Jennifer is sweeping up, from the bottom of a trash can, and one I've never seen before which was from inside a rotary dial phone. Sometimes these angle choices seemed out of place and like the director was playing with what might look cool or something, as they didn't serve any real purpose. Much like Halloween

, all we see of the killer before his final reveal is his own point-of-view as he kills his victims, or simply his dark shadow on the wall. There's some perverted heavy breathing during the POV shots - but maybe the camera guy was just out of breath.
One thing that made me insanely happy was to see Renee Estevez, a.k.a. the final girl from Sleepaway Camp 2

, quite possibly my favorite of all 80s slasher sleaze. And there's more familiar faces hidden in this group of grocery store clerks including Sam and Ted Raimi, plus a cameo at the end by none other than Bruce Campbell. Ted is his typical goofball role as Produce Joe, who bops around like a dork listening to his headphones and oblivious to everything. 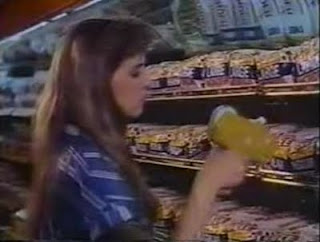 The kills are true retro-licious, with the killer mostly using what I can only describe as a machete-knife. I don't want to use a cliche and say that he is compensating for something, but SERIOUSLY. That is one ungodly large knife. Sleepaway Camp

girl gets it first, but she's just stabbed. Boring. The others are much better though, including a guy getting skewered through the eye on one of those receipt stabber things; a knife through the back of the head; poor Sam Raimi getting impaled on a meat hook; a head getting crunched by the cardboard baler; and a guy getting his head run through that weird meat-cutting machine.
I'm thinking that Netflix only gave me a watered-down version of the movie, because some of what I was reading about it and pictures I found on the Internet were not in the film. Like this pic from the guy getting his head cut in half in the meat-cutter: 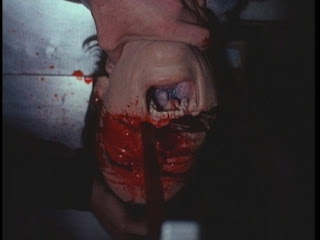 Wish I could have seen that unedited scene. Anyway. The baler death would have been a lot cooler in my movie. Wanna hear what I was thinking? Okay, the balers we have now (or at least the one at my store) are much larger than what was in the film - in fact, the bale chamber is the perfect size for a normal sized human to fit in the bottom. And they're pretty deep, too, with the big smoosher thing coming down veeeery slowly. After a certain point, there is no escaping. So wouldn't it be a lot more suspenseful if somebody woke up inside one of those things or something, having to watch the thing that's going to turn your body into mincemeat come at you so slowly and loudly. 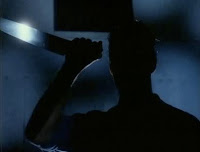 The most glorious moment of the film occurs at the end when Jennifer attacks the killer after being drug from underneath a car. Read this carefully now: Jennifer stabs him in the chest with the machete-knife, the killer falls over on his back, and as his body hits the ground, the knife fucking FLIES OUT OF HIS BODY out of frame, only to land perfectly blade down on a cardboard box. My horror-loving heart is all a-flutter. That was simply fan-fucking-tastic.
Most of the dialogue was hilariously cheesy, and consisted of a lot of that horror movie cliche stuff like "Hey, [insert name here] stop fooling around!" Plus there was a great moment where one of the guys was telling a story about how psycho BF Craig once beat a guy with a blender. "A blender?" "Yeah, a Hamilton Beach blender."
Very fun little movie. It needs more love! Let's give it some!
Sidenote: Apparently a jar of Wheat Germ can be both delicious AND a deadly weapon. Good to know.
Posted by Michele (TheGirlWhoLovesHorror) at 1:12 PM